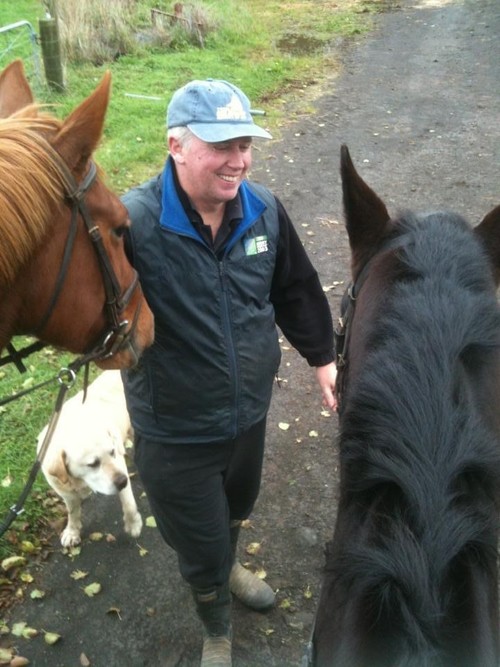 I was in the shower one morning when I looked down and thought one breast seemed different to the other. I had a feel around and discovered a lump, which I thought was strange. I asked my wife Tracy to take a look and she suggested I see a doctor. 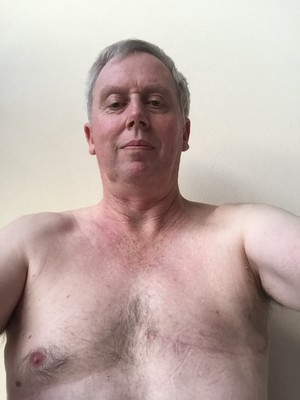 When the doctor checked me out he could definitely feel something in my breast but told me not to panic, it could be anything. He arranged for me to get a scan and a mammogram. The results came back showing an unusual growth, so I was referred to a surgeon for a biopsy. I was diagnosed with invasive ductal carcinoma (the most common type of breast cancer) and a week later I had a mastectomy.

I reacted with disbelief. In the back of my mind I thought it could be breast cancer, but it all happened so quickly so I didn’t have much of a chance to think too much about it. We had been planning a month-long trip overseas the following month to escape the winter, but that had to be cancelled since we were due to go a week after my mastectomy.

I went to Taranaki Base Hospital to see the oncologist. I was expecting to see them in person, but when I showed up I was ushered into a room with a TV screen and had a video call with an oncologist in Palmerston North. I was a bit taken aback as I hadn’t been warned at all. Initially I found it difficult, but during the conversation a lot of statistics came out. One was that some people who receive chemotherapy either don’t benefit from it or don’t need it. Towards the end of the consultation he said there was a test I could do called a MammaPrint, carried out by an Australian firm. I could get a sample of my tumour sent to them to determine if I’d actually benefit from chemo or not, at a cost of $6500. A lot of the health insurance companies apparently won’t cover it, but luckily mine did. I did the test and was hoping I wouldn’t benefit, but it came back saying I’d have significant benefit. At least it gave me peace of mind that having chemo would actually help me.

I had four rounds of chemotherapy, three weeks apart. I had no idea how it would go, so scheduled to have the two days following my first course off work. I went in and the first drug they pumped into me was fine, but the second drug gave me a reaction so I had to stop and be given painkillers. The next day, a Thursday, I felt fine and on Friday I went back to work. But on Friday night I deteriorated rapidly. I was facing an awful lot of pain and it took me a good 10 days to recover. I discovered the drugs they give you pre-treatment to counter the side effects were the ones actually causing the issues I was having. So for the next course, we halved those and things went a lot better. By the third course we cut them out altogether and for the last course they cut back the amount of chemo they were giving me.

Following chemo, I started on tamoxifen. I consider it the lesser of two evils, I’ve learnt to deal with some of the side effects I was having. Around four days into the Covid lockdown in March I started coming out with a bad rash and eczema. We thought it tamoxifen was causing it, so my oncologist took me off it for a month and I felt loads better. Some of the symptoms disappeared but didn’t go away completely, so I was referred to a skin specialist. A biopsy showed it was actually the chemo that affected my immune system and it was just a matter of waiting for my immune system to reboot itself.

One of hardest things for me has been fighting the fatigue and all of the issues that go with that. Prior to having cancer, I could have 10 different tabs open on my computer open and know exactly what was happening in every tab. But now dealing with just one tab is a challenge – if I get interrupted I’ll have to start what I’m doing all over again. It’s been really difficult managing the loss of concentration, and I have memory problems now too. Tracy will tell me I’ve done something but I’ll have no recollection of doing it.

I’ve been so fortunate to have such great support from my family during this time. My daughter Caitlyn (who is 24) and her partner live with us and it was really nice to have them around during lockdown. 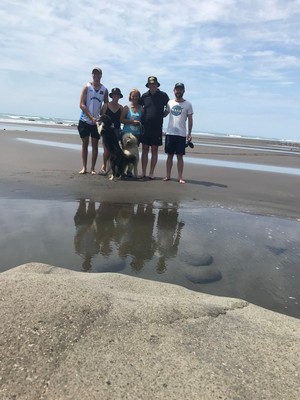 I now have good days and bad days, but the bad days are lot better than they were six months ago. I had to reduce my working hours and I’m in the process of building back up to full-time again. I’m feeling positive about the future. If I continue to feel the improvement I’ve felt over the last couple of months, there’s no reason why I can’t go on to live a good life.

Before, it had never crossed my mind that I might get breast cancer. Like many other men, I had a ‘she’ll be right’ attitude towards my health, but after I hit 50 I became more conscious about looking after myself. It’s that time of your life where you stop and think about things, because you want to be here not just for a good time, but also for a long time. I’ve learnt the story for men is much the same as the story for women – be aware of what your body looks like and don’t be afraid to seek medical advice if you notice changes.

Read the stories about Men with breast cancer