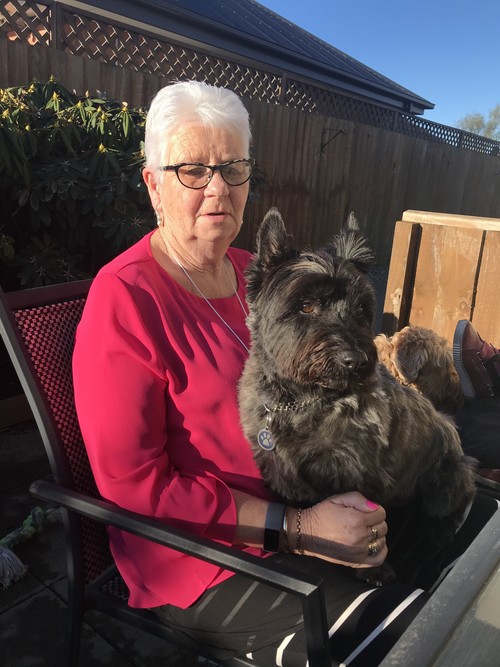 Ruth was 52 when she was diagnosed with breast cancer. Twenty-one years after her surgery for breast cancer, she developed lymphoedema and was funded by BCFNZ to have lymphoedema therapy. Here, Ruth shares her story and her advice for other women…

My breast cancer was found on my very first mammogram when I was 52. I was on the mobile mammogram bus when I was told I would have to go back to Dunedin for more tests. They couldn’t find anything so I had to go back again to have a biopsy, where they only found a little bit of cancer. That was back in March 1999.

When I heard it was cancer, everything was just a blur but once everything settled down, I said if there’s cancer there, then take it off. They were quite surprised that I wanted that, but my girls were grown up, so I didn’t need my breast. I felt like I was making the right decision, if taking my breast could mean saving my life, or if there was more cancer in there. If I had been younger, I may have thought ‘oh my god’, but I didn’t want anything to happen to me.

I had a mastectomy and they took out my lymph nodes, but didn’t find anything. Later they said I had done the right thing by having a mastectomy, as they found more cancer during the surgery, and it meant I didn’t have to have chemotherapy or radiation.

For me, there was nothing that has been really challenging about my breast cancer journey; I got lucky and I have my mammogram every year. I’ve just carried on with things.

Though it’s been 21 years since my surgery and I recently was diagnosed with mild lymphoedema. A bit before March this year, I noticed my hand and arm had started swelling and I thought it might go down but it didn’t. I went to Breast Care in Dunedin and they couldn’t find reason for the swelling, which was 180cm on my left arm compared to 176 on my right. Then when the BCFNZ Pink Caravan came to Oamaru, I visited the nurses and they said it looked like lymphoedema. They said I should apply for funding for lymphoedema therapy, and I did. I’m very grateful for the funding, which meant I could be treated in Christchurch. It’s a very mild form of lymphoedema, so I just need to wear my sleeve and glove each day. The swelling has gone down to how it was before, and now I can get it managed in Dunedin, which is closer for me.

It’s been a bit of a nuisance but I’m lucky to get through so far. I do find my arm and hand isn’t quite as flexible as before; when I put the glove on first thing in the morning, it can be a bit stiff. I was signing my name the other day and found that a bit hard!

Always go for your mammogram, go every year. I have two daughters and they both get checked, and I go to Dunedin for mine every year. If I hadn’t gone, who knows what could have happened?

Ruth is 73 and lives in Oamaru.