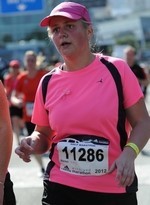 Deciding on my 28th birthday to do something positive for both my health and for charity, I started training for the 2012 Auckland Half marathon. My grandmother underwent a mastectomy and radiation therapy for advanced breast cancer the previous year at the age of 83, something that shocked and distressed the family but ultimately was successful and she remains very well.

Also this year, after being a radiographer for several years, I undertook my postgraduate mammography training in order to be accredited to perform BreastScreen examinations.

Training through the winter wasn't easy! Running three times a week on freezing cold Rotorua winter nights was no easy task, and I tended to do loops of the local streets in order to be a bit safer. Let me tell you this was often monotonous but often also rewarding and a good outlet from the hours of study and assignment writing I needed to compete as well as working full time.

Running the Auckland Half Marathon was the culmination of a years effort - the atmosphere was electric and despite the 5am start, the first 11km to the bridge was a breeze. I was aided and abetted by a lovely nurse I met along the way, whom I ran with to the bridge, taking my mind off the thoughts of "oh-my-god-I-am-going-to-die-my-legs-hurt-already-and-theres-still-17km-to-go" and other such nonsense. The next 10 km were a struggle, especially running along beside the marina where I really did consider stopping because my legs were on fire. 3km to go. Finally I made the finish line in a respectable time of 2 hours 15 mins and as evidenced by my finishing photo, I was shattered!

If I had one piece of advice it would be "be bold" when asking for money. One in nine NZ women develop breast cancer in their lifetime and so most people are more than happy to give you a few coins. I was lucky enough to raise over $900 from friends, family and colleagues when my initial target was half that.