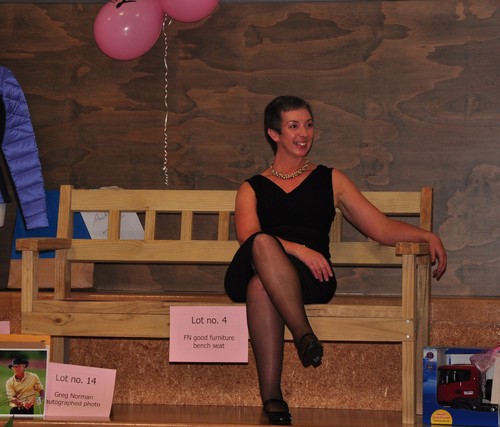 The process from mammogram to biopsies, to operation and reconstruction took an amazingly short space of time. It was a guided rollercoaster and I couldn’t get off.

It was during chemotherapy that I decided to raise some funds for BCFNZ. I needed a distraction from the cards I had been dealt and wanted to give something back for being given a chance to survive.

The sit-down dinner and drinks was nearly completely sponsored, my daughter’s friends served each table while three of my friends cooked, and we had live entertainment from a pipe band and gypsy guitarists, while everyone ate.

We had several ways of letting people spend money on the night, all of which were made easier by an Eftpos company, who provided mobile machines and connected them straight to a bank account.

A traditional raffle was split into four categories – male, female, kids and family – and there were 16 prizes in each category.

The biggest success of the night though was “Behind the Boob” – funny and simple. 200 gifts in boxes hidden behind screens, and 200 ‘BOOBS’ numbered and stuck on the screens. Hand over $5, pick a number and get the gift. The range was from a chocolate fish to a Swanndri $250 voucher with everything in-between. I should have made them $10 a go and limited them to one person each – it was a hit and I would be delighted to share this idea with anyone!