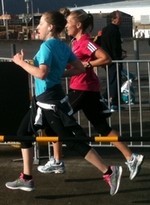 We ran the Armstrong Motor Group Wellington Marathon on Sunday 24 June 2012. Being a mid-winter race, the Wellington marathon is plagued each year by bad weather – the kind that batters and breaks you – certainly not the type of conditions that you want to run 42 kilometres in.

After running a half marathon earlier in the year, we began to toy with the idea of a full one. The half marathon we completed in good time and without injury – but did we really think we were capable of a whole 42 kilometres? We didn’t consider ourselves athletes – or even seasoned runners – at that point. We doubt that we could have mustered the same degree of motivation had we taken the plunge solo. The marathon itself was the easy part. The long training runs, each weekend, every weekend, were testing. So it was a personal challenge that made us sign up in the end, picking up a hobby that might otherwise have died a slow, painful death, and turning it into something that would challenge us – both mentally and physically.

We raised $1,950 for BCFNZ, which was our chosen charity due to a close family member having recently suffered and thankfully overcome this illness. We emailed friends, family and colleagues to gain their support and without knowing it we tapped into other people affected by breast cancer, who in turn showed their support. We were overwhelmed with people’s generosity for our cause, in both monetary and moral support.

Our advice to other people thinking about working towards a similar goal is to combine a personal challenge and support network with a contribution to a wider cause. The satisfaction and sense of achievement we felt running across the finish line was like nothing else!