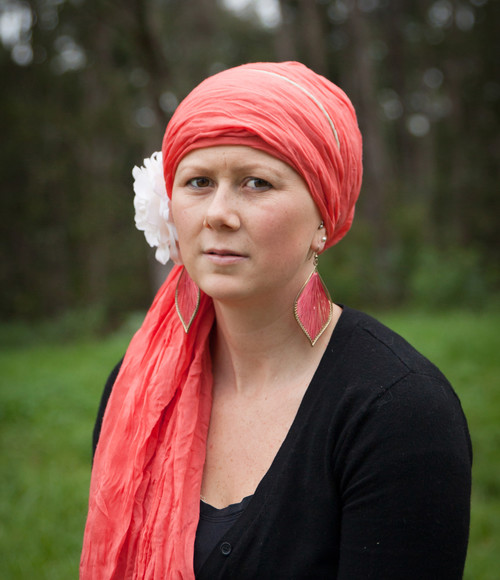 May 15, 2013 is probably not a day you remember. Would it help if I remind you that the newspapers were filled with the story of movie star Angelina Jolie’s preventative mastectomy, after she’d tested positive for the BRCA1 gene mutation?

It’s not a day I’ll forget. Because on May 15 I learned that I, too, was BRCA1-positive. Like Angelina, I had an 80% chance of breast cancer.

It wasn’t such a surprise to me – I’d been diagnosed with breast cancer already, when I was 29 years old. By the time Angelina’s news came out, I’d just finished chemotherapy.

The future has changed irrevocably for all of us. Even for my baby, Summer, who was 18 months old when I was diagnosed. She turned two during the six months of treatment that I hope have cured the cancer, but which have turned life upside-down for our little family: me, my partner Kurt, and Summer.

My journey through breast cancer started with a dream. Last October, I dreamed I saw my Nana, my great-grandmother, who died nine years ago. Our family is Irish, very close to each other, and Nana was a mainstay of the family. In fact, she raised my mother after my grandmother – Nana’s daughter – died of breast cancer at age 37. Nana ended up living with my family for 20 years, and I adored her.

But I didn’t expect to see her in the middle of the night! In my dream, she said, “Emerald, check your breast.” I couldn’t see her properly, because she was so close to my face, but I knew the feel of her fingers – Nana had the gnarliest fingers! – as she picked up my hand, and moved it to my right breast.

I woke up with my hand on my breast, and I could feel it. A lump. Hard. About the size of a 10-cent piece.

I thought, what do I do now? It was three a.m., so after a bit of tossing and turning, I went back to sleep. In the morning, my first thought was, is the lump still there, or was it just a bad dream? I felt my breast. Still there.

I woke Kurt, and asked him, “Is this normal?”

Kurt’s not an expert on breast lumps, but he was pretty sure it wasn’t normal.

Unfortunately, it was Labour Weekend, so I had to wait a few days before I could get to my GP, who sent me straight for a mammogram. The radiologist showed me the films, pointed out the lump. She said it probably wasn’t breast cancer. She said, “You’re too young.”

But the lump was suspicious enough for me to need a biopsy – I didn’t even know what a biopsy was at that stage. I had the test, and the results came on a Friday afternoon: it was cancer. It was the worst day of my life. My mum was with me when I got the call. Kurt came straight home – he knew it was bad news the moment he heard my voice on the phone – and my sisters and dad came over, too. I’m so lucky to have them, to know they’re with me through everything.

I had my surgery, a lumpectomy, six weeks after my mammogram. By then, the lump had grown from 19mm to 26mm. It turned out I had triple negative breast cancer, which is particularly aggressive, and often affects younger women.

Thinking back, the surgery was the easy part. I was fit – before Summer was born I used to be a power-lifter, and I’d kept up my gym membership – and I recovered well. Thankfully, my lymph nodes were clear. Although the cancer was quite advanced - grade three - it hadn’t spread. I felt pretty good at that stage. Our family had a really nice Christmas, a lovely summer break.

In January, I went for counselling to see if I should have the genetic test that would determine if I was positive for one of the BRCA gene mutations that increase the chance of breast cancer. My grandmother’s death at such a young age was sufficiently worrying to justify the test – I couldn’t stop thinking how my mum had been left without her mother. So I had the test, and was told the results would take about four months.

Then, in mid-January, I started chemotherapy. Chemo burned my hands to smithereens. When Summer came to me for a hug, or to be picked up, I had to pull away. She was too young to understand fully, but she’d say, “Mummy sore.” I would just cry. I developed dreadful mouth ulcers. I couldn’t drink anything except small sips of warm water – cold water hurt too much – and I couldn’t eat much other than mashed potato. I’m a chef, I love to cook. So although I couldn’t eat my own food, I still wanted to cook for Kurt. But the drugs affected my taste buds. I’d work hard to create a dish, and it would taste awful.

Kurt was amazing through it all. I can say that breast cancer has brought us so close together, even though it’s been such a strain financially. Still, by the time I got to my last treatment in May, we were all just sick of it. I remember saying to Mum, “I’d rather die than go through this again.”

Then the results of my genetic test came back. I was BRCA1 positive. Which meant there was a very high chance that I would indeed go through it all again. I didn’t want to die, and I didn’t want more breast cancer. Breasts, or life? It was an easy choice.To me, my breasts had become cancer-carrying time bombs. Like Angelina Jolie, I decided to have a preventative double mastectomy, with reconstruction.

I look down at my hands, still scarred from the chemo, still unable to touch hot water, and know that I want to stick around. I want to hold my daughter. And, hopefully, one day, a new baby.

But this story doesn’t end with me. My mother and my two sisters are about to be tested for BRCA1. Summer will be tested when she’s around university age. Whatever the results, whatever they all decide, I’ll be there for them, the way they were for me.

My life before breast cancer was like a dream. I used to complain about the traffic, or worry about what we’d have for dinner. Now, I love those problems, because they’re a sign of a normal life. A sign of hope.