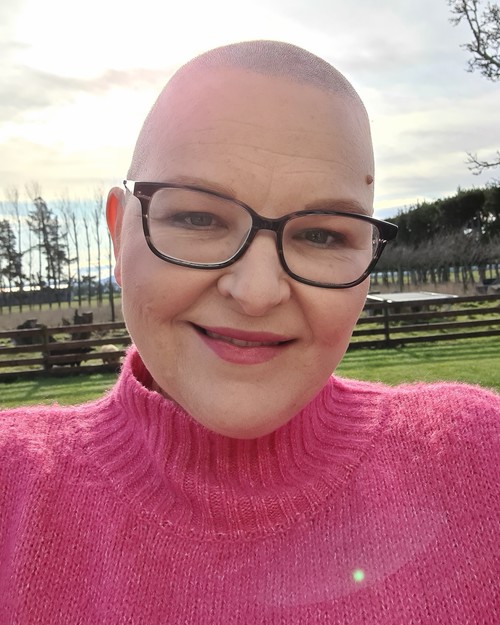 Lee-Anne was diagnosed with breast cancer weeks before the Level 4 lockdown last year, late into her first pregnancy and aged 37 years old. After an emergency caesarean, Lee-Anne had a mastectomy when her baby was six days old, then went through six months of chemotherapy and five weeks of radiation treatment. One year on, Lee-Anne is hosting a Pink Ribbon Breakfast to raise much-need funds for Breast Cancer Foundation NZ and awareness about the importance of checking your breasts.

Around 25 weeks into my pregnancy I found a large lump in my right breast. I’ve always had quite lumpy breasts so didn’t think much of it. But it started to feel different and it got bigger. Of course, I’d been on Google and had been self-diagnosing for a few weeks. But one day at work I called my husband and said I really wanted to get it checked out. At 27 weeks I made an appointment to see my GP and he referred me for an ultrasound, mammogram and biopsy. At 31 weeks, I was told I had invasive lobular carcinoma.

The way I found out was over the phone by the receptionist at the medical centre and I was home alone. The first thing that came to mind was that I wasn’t going to get to see my baby grow. It’s hard to describe the feeling that came over me, it was like a white heat washing over me. I started going through all of the different scenarios in my head. You hear the word cancer and you associate it with dying, even though you know more people live after a diagnosis than die from it.

At 37 weeks I had an emergency caesarean and then a mastectomy when my baby, Hugo, was just six days old. It was really hard facing this during lockdown and not having support around me. Hugo ended up in NICU and my husband Gordon and I weren’t allowed to visit him together. Gordon was there for the induction and birth, but had to stay home with the baby for my mastectomy. Luckily my sister joined our bubble and helped him – he had no idea what to do with a six-day-old child!

Five weeks after surgery I started on chemotherapy, which took six months. Then I had five weeks of daily radiotherapy and that was brutal, much tougher than the chemo. I ended up with a couple of staph infections in the skin because of the peeling.

I was scared that being away from Hugo would affect my bond with him. It was incredibly lonely in hospital when all you have is your own thoughts. It destroyed me that I couldn’t hold him for long periods of time. I was terrified he wouldn’t even know who I was.

Now I’m on the next step of treatment. I was given the option of having Zoladex injections every month for five to 10 years but I’ve decided to have my tubes and ovaries removed instead, and then hormone blocking therapy for five to 10 years. Because my breast cancer is hormone positive, I wanted to do everything I could to prevent it coming back.

I’m feeling really good now and when I look back at the last 12 months, I wonder if that was actually my life. I can’t believe I was bald six months ago, or that I went through chemo.

After being diagnosed, I knew that Breast Cancer Foundation NZ was a cause I really wanted to get behind. I did the 5km Pink Ribbon Walk when I was going through chemo late last year and raised over $3,000. Now I’m hosting a Pink Ribbon Breakfast to try and beat that amount.

There’s so much Breast Cancer Foundation NZ does that people don’t realise, so anything I can raise can only be a good thing. During my treatment I used their mybc app to connect with other women going through breast cancer, and I received a lot of support from their nurses. Now I just want to give back.

I also want to raise awareness to get more people to ‘know their normal’ and check their breasts. So many people think breast cancer only happens when you’re older, but my story shows how that isn’t true at all. It’s something I want to bang on about until the cows come home because if it saves another life, then it’s totally worth it.