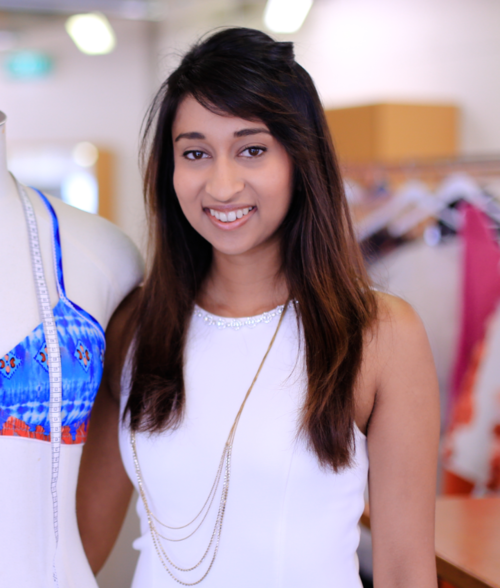 Kamya Ghose is the 26-year-old behind mastectomy lingerie label, Queen Zaria. Three years earlier she was diagnosed with breast cancer after noticing a lump in her breast.

This is her story.

“Breast cancer just didn’t seem to apply to me,” explains Kamya as she talks about how being a young and health-conscious gym bunny meant that cancer had never crossed her mind.

Yet, at the age of 23, she was diagnosed with the very early stages of breast cancer, known as ‘stage zero’ or ‘ductal carcinoma in situ’ (DCIS) – a cluster of cells gone bad that could develop into full blown breast cancer if left unchecked.

Luckily, Kamya acted. Ten days later she had a mastectomy and the cancer was revealed to have been more insidious than initially expected: it was high grade and almost certain to have spread.

With the surgery over, Kamya found herself at a loss. Her family and close friends with whom she’d shared her struggle had been hugely encouraging, but there was a definite gap in formal survivorship support for people her age. Not least were the large, unattractive mastectomy bras that seemed to cement her identity as a uni-boobed cancer patient, rather than empower her to feel like a woman again.

While grappling with this, Kamya opted to have her healthy breast removed too, and expanders put in. “I knew that if I kept it I’d be living in constant tension, freaking out every time I felt a lump, or even a pimple. I know the studies show no real advantage of getting both off but for me the peace of mind was huge.”

Then she decided to tackle the bra situation.

Fast forward three years and Kamya is the founder of a social enterprise, Queen Zaria, named after Warrior Amina Zaria who triumphed against the patriarchy and became the first queen in her area.

The collection, while still being finessed, will stand for female empowerment, strength, confidence and beauty. It’s also a peer-to-peer support system for young women going through breast cancer – a testament to just how important talking to others proved in her own journey.

Asked what she’s taking away from her cancer journey Kamya replies that people are strong: “We can push ourselves and be positive. No one else could have done that for me – I had to push forward myself. It’s amazing how much ability we have if we want to put it to use.”