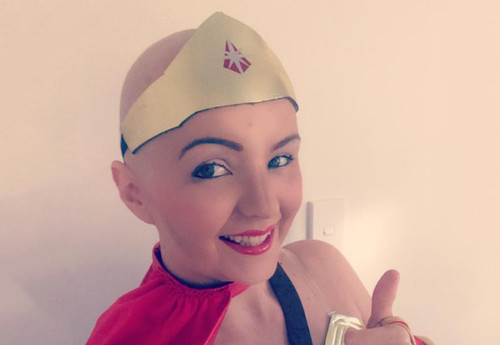 Amber describes the first time she saw her newly shaved head in the mirror as weird but not without a silver lining. “I loved being bald," says Amber. “It was empowering, liberating and I really felt like I saw who I was for the first time.”

Amber was just 26 years old when her boyfriend felt a lump in her breast. Two months later, she found out that it was breast cancer.

It’s a common misconception that breast cancer is a disease that develops only in older women. The reality is that in New Zealand, one woman under the age of 45 is diagnosed with breast cancer every day.

On the 2nd of December, 2015, Amber became the statistic. Her diagnosis read like a foreign language: stage 1, grade 3 invasive ductal carcinoma (IDC), ER+/PR+, HER2+.

Seven days later, the cancer was removed with a lumpectomy and Amber chose to undergo IVF treatment before chemotherapy started, which required a lead up of injections that her boyfriend, Kieran, had to give her. (Cancer treatment can have a devastating effect on fertility.) She then began the first of what would be multiple rounds of chemotherapy over the next eight months, ending with preventative surgery, a nipple-sparing bilateral double mastectomy with immediate reconstruction. While this has meant that she kept her nipples, she has lost sensation and will never be able to breastfeed, but she’s alive and that’s what counts.

Having finished her final round of Herceptin treatment (a targeted therapy used against HER2+ breast cancer), Amber is focused on transitioning into life after cancer. “Eventually the breast cancer diagnosis will be a thing I went through, not who I am or something I am defined by; just an experience I had to go through to get to where I want to go next.”

Breast cancer survivorship is as much a mental game as it is physical. Every single survivor, woman and man alike, must come to grips with a new body; a ‘new normal’. So when life-saving treatment causes you to gain 12 kilograms, chronic fatigue stops you exercising, your sex drive is wiped out and you realise you have to be on a drug for the next ten years, going forward is far easier said than done.

But Amber remains positive; after all, it’s about how you choose to deal with a situation that dictates whether it destroys or empowers you. Her sights are set on inspiring others to take action, with a newfound voice – an unexpected result of her breast cancer diagnosis and the blog that she began to help her cope. She spoke at a Pink Ribbon Breakfast, organised by The Little Carousel, in Christchurch.

With no family history of breast cancer, Amber was shocked to learn that women should be doing self-breast examinations from the age of 20. "I was getting cervical smears from the recommended age but at no point was it explained to me that I should be regularly checking my breasts."

Sadly the message about checking doesn’t seem to be reaching enough younger women. An exceptionally driven young women, Amber started an initiative to address this lack of awareness through her blog, “When things went tits up.” (A platform that earned her a KiwiBank Local Hero award in recognition of its calibre as a support and education medium for recently diagnosed New Zealanders.)

She calls it her "8th of the Month Campaign” and it encourages women to check themselves on the 8th of every month. Why the 8th? Historically a lucky number for Amber, one day, in a moment of serendipity, she realised that if you turn an 8 on its side it looks like a pair of breasts.

Amber has been blown away by the response that her blog and campaign have created. She’s quick to say that it’s about so much more than her story. “This is a really big part of my journey and it is really important to me because it is bigger than me; it’s about all young women and being confident in what their normal is.”

Asked what the biggest thing is that her cancer journey taught her, Amber wisely replies that she has learned the importance of prioritising herself when needed. “So many women are busy doing things for their kids or partners or work that they forget to look after themselves. Without our health, we are unable to be the best version of ourselves.”