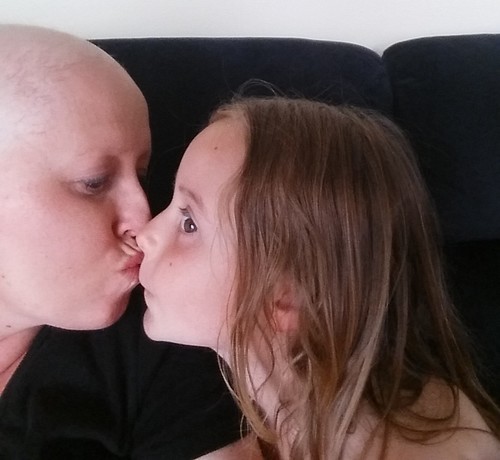 Melanie, a mum of two from Paraparaumu, tells her story:

"I was enjoying a nice hot shower one chilly morning in the middle of July 2016. I could hear my kids fighting in the hallway but I didn't care as the shower was so nice and hot, I didn't want to get out.

I had just finished cleaning my arms with the soap when I started on my breasts. As I swirled the soap around them, I noticed something strange - not a lump, but more of a hard area that hadn't been there previously. I disregarded it as I guess I didn't want to admit it was an issue and said to myself I would keep an eye on it.

Fast forward a week or so and this area got harder and bigger. It happened really quickly so I made an appointment at the doctors to get it checked out.

A few days later and I was sitting at the doctor’s. She felt the lump and advised me that I may have mastitis. Luckily, she referred me to have a mammogram and ultrasound that following Monday. I knew it was cancer - I had Dr Googled it!

Monday came and I had the mammogram but the cancer was hiding, not wanting to be found. It wanted to spread its ‘magic’ if it could have the opportunity.

The ultrasound was the same, again it played hide and seek until they came to my lymph nodes and the cancer could no longer hide. No one wanted to confirm anything until a biopsy had been taken and tested by the pathologist. Another week of waiting, but again, I knew.

I was called by the breast clinic to come and meet with the breast specialist and to bring a support person but they wouldn't tell me why. Now I knew for sure it was cancer!

My hubby and I turned up to the appointment a few days later. We got told I had a mass in my breast and a lot of lymph nodes that were enlarged. He wouldn't confirm if it was cancer until the pathologist report came back but I was referred for an MRI where they could see exactly what was going on.

The rest was honestly just a blur of tests, scans, xrays, bloods etc etc. My cancer was an 8cm mass of cancer cells that had spread to my lymph nodes. It was not a tumour nor did I have the classic signs of breast cancer. I was stage 3, grade 3, and 38 years old. They couldn't see that it had spread to other parts of my body. To me, that was the scariest thing!

I had to wait a week for those results and it was the worst week of my life. I was so anxious. Once I got the news, I was fine, it was just the waiting that was the worst thing.

It was decided I would have chemo first to try to shrink the cancer before having surgery and also kill any cells that may have escaped into the body. I did six months of chemo, which gave me terrible body aches. That six months was the worst. I worked right throughout my chemo. I also managed to look after my children, Kiera, then aged five, and Kaleb, then aged 10, alongside my hubby, who has been my rock. I had friends and family take me to chemo which really great and I also had a great supportive workplace that made it easy for me to work and have treatments.

I finished chemo mid-March 2017 and then I waited for my body to recover and get my blood counts up before a surgery date was booked. It was cancelled and rescheduled four times and eventually went ahead 14th April 2017.

The surgery went well. They removed my breast and 13 lymph nodes. The scar was neat and tidy and it looked as though it was a job well done. I spent two nights in hospital then went home but had to go back a week later because I got an infection in one of the drain sites. That was a four-day stay.

I took four weeks off for my surgery and went back to work afterwards. No sooner had I gone back to work the radiation department rung to say I would be starting radiation the following week. No rest for the wicked!!

I have now finished my treatment and have had physiotherapy through PINC to help me recover and work out an exercise programme for me going forward.

I will never be the ‘me’ I was before this cancer created a new life for me. But I've learnt a lot from this experience; a lot of good things have come out if it. I am a strong person but I feel this has made me even stronger and it's also made my close relationships with certain people stronger, too.

For now, I look forward to being told I'm cancer free and starting to build a healthy, new me."