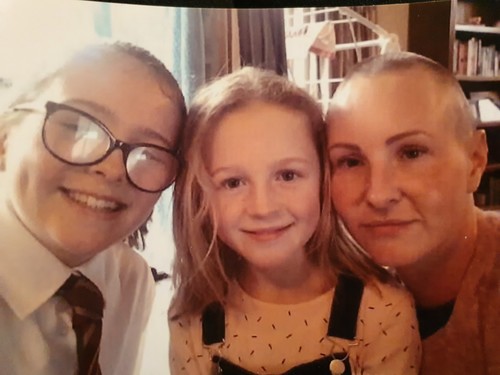 Rachel is doing a Pink Ribbon Walk for the first time after being diagnosed with breast cancer last April, just before her 36th birthday. She’ll be joined by her mum (who also had breast cancer at the age of 58), sister and eldest daughter. Rachel is sharing her story to raise awareness and spread the message that early detection is your best protection against breast cancer.

My sister, Carly took part in the Queenstown Pink Ribbon Walk last year and she suggested I do it with her this year. It’s such an amazing cause to be involved with. To see women banding together to raise awareness of breast cancer and to celebrate survivors will be something quite special. I’m looking forward to being part of a community of likeminded women supporting a Breast Cancer Foundation fundraising event. I'm walking for every woman who has fought this fight or will in the future.

My mother, sister and eldest daughter are walking with me. I live in Invercargill and my sister lives in Queenstown so we’re making a girls trip out of it. As my mother and I have both had breast cancer, walking with her and my family will be memorable and empowering for all of us.

During Christmas 2018, while I was away in Te Anau on summer holidays, I felt a hard mass on the top of my right breast. I did think it was unusual but dismissed it as anything serious. My mum had been diagnosed with breast cancer three years earlier so the thought of breast cancer was in the back my mind. I decided to get checked out for peace of mind and to get rid of the nagging thought. My doctor initially dismissed my concerns as I had a history of lumpy breasts. She suggested I have a mammogram if the mass didn’t go away.

The mass had worsened and I had a gut feeling something wasn’t right, so in April I went for a mammogram. Afterwards, I sat anxiously and watched women enter and leave their appointments. I was left until last. When I finally got called to discuss my screening, the first question I was asked was “do you have medical insurance?” which I had unfortunately just cancelled. I then had an ultrasound and the radiologist admitted that she was very concerned, she said I should come back the next day for a biopsy. My initial reaction was shock and disbelief, I couldn’t believe this was happening to me.

The following weeks were a blur of tests and further biopsies. MRIs showed I had one tumour in my right breast 50mm, and three tumours in my left breast, 17mm, 70mm & 14mm, which the mammogram hadn’t picked up. I started wondering if it was in both breasts, where else was it? I was diagnosed Grade 3 ER+, PR+, HER2- invasive carcinoma. It had also spread to the lymph nodes on my right side.

It was surreal being faced with my own mortality, the unknowns were overwhelming. The main concern I had was for my daughters and how it would impact their future. My girls are 10 and 14, ages where they need their mum. One of the hardest parts of this journey was having to tell them I was unwell. If I could’ve kept it from them I would have. But I knew I had to fight harder because of them and they motivated me every day.

You hear stories about breast cancer diagnoses, and maybe I was naïve, but I never thought it would happen to me. Throughout my journey I often questioned if it was all actually happening.

My mother, Marian was diagnosed with breast cancer when she was 58 so I had a genetic test to establish if it was hereditary. My mother was diagnosed three years prior. As I have a sister and two daughters so I wanted to make sure they were safe. The genetic testing revealed that mine wasn’t hereditary, but just bad luck.

In May I had a double mastectomy and five right lymph nodes removed from my right arm. I also had chemotherapy, radiation, and I’m now on hormone treatment for the next 10 years.

Going through chemotherapy was quite traumatic and grim for me. After my first session I ended up in the A&E. I couldn’t stop vomiting as my body reacted to the intense medication. My dosage had to be decreased so that my body wouldn’t suffer the side effects as intensely. Throughout chemotherapy I couldn’t stop craving carbs, so I put on weight which made me feel worse. Radiation was equally as bad. I still have burn scars as a constant reminder of the treatment. I felt really depressed throughout the experience. It felt suffocating and never-ending and I got sick of the “cancer talk.”

I had treatment in Invercargill hospital and radiation in Dunedin. The nurses were amazing and treated me with such compassion. I remember thinking how they must deal with sick patients everyday but they never failed to be supportive, reassuring and kind. I’m thankful to them for making my treatment journey so much easier.

I went back to work between chemo and radiation for a few hours a day. I craved the normality and needed some structure during the chaos of my treatment. It was good to be back amongst the gossip and chatter, taking my mind off the cancer. My workplace was flexible and supportive, which was great.

Having to look at my chest after having my double mastectomy is still etched in my memory. I felt it had taken away my womanhood and I felt less confident and attractive. It sounds terrible to say, but I remember thinking my fiancée might not be attracted to me or want to stay with me anymore. In reality, he was amazing and I don’t think I could have done it without him. He never failed to make me feel beautiful and loved, when I needed it the most. My family really made my journey more bearable and motivated me to fight as much as I could. Having a double mastectomy is a constant daily reminder of the horrible journey I have experienced, but at least I am alive.

At the end of my treatment everyone was so excited. My friends and family asked how it felt to be finished but it honestly felt like it was just beginning. Throughout my treatment, I was filled with adrenaline, in a constant state of disbelief. The full impact of my experience didn’t hit me until after treatment stopped, as I had time to reflect on the reality of the situation.

I’m back working full-time now, working in accounts at PlaceMakers. I enjoy the normality of the work routine and appreciate the small things in day-to-day activities.

I do worry that there is a possibility of cancer returning. The whole experience put life into perspective. As cliché as it sounds, we don’t know what is going to happen tomorrow and life is too short to sweat the small stuff. I don’t worry about the small things I used to anymore as my new mentality and outlook on life has changed. My experience has encouraged me to live life to the fullest and appreciate each moment.

I’m so thankful to the Breast Cancer Foundation (BCF) nurses who supported me throughout my treatment. I’m also grateful I could get counselling funded by BCF. My breast care nurse referred me to this service and I found it helpful to talk things through with someone who understood and would listen.

I want to share my experience to raise awareness and reassure other women that they aren’t alone. I am an example that if you notice any unusual changes in your breast please get it checked. Even if your doctor or GP dismisses it, it is your body and you know it. As I wasn’t at the age where regular mammograms are recommended, I think the concept of “knowing your normal” is even more significant. I encourage all women to educate themselves on the signs and symptoms of breast cancer and learn how to do self-checks.

Rachel is a 36-year-old mum to two daughters (Lila aged 10 and Ava 14), living in Invercargill.