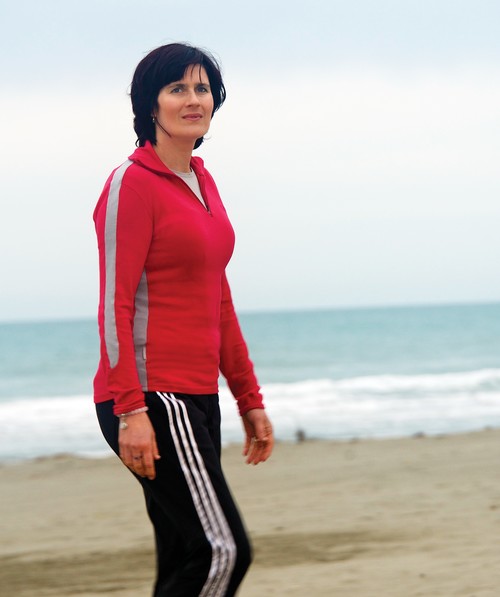 At the age of 36 while breastfeeding our nearly one-year-old baby I noticed a hard lump in my left breast. I tried to massage it out thinking it was a blocked milk gland but it felt a bit different to previous lumps: quite hard like concrete and a bit painful when massaged. I put it to the back of my mind as I had decided to breastfeed my daughter until she was one and thought I would deal with it once I had weaned her.

My Mum was diagnosed at the age of 43 with breast cancer and died when she was 54. I was conscious of the possibility of cancer, and started paying privately for mammograms from the age of 30, and made sure I had one between my first and second and second and third children. I had also been to see a geneticist to see if I had any genetic link to cancer but as I was an only child with only a step-auntie there was no female alive to test for any gene abnormalities.

After I had weaned my daughter and waited the recommended 12 weeks after weaning to allow the breasts to return to normal my husband convinced me to go for my routine mammogram. They detected abnormally calcified tissue and booked me into a clinic that night followed by an ultrasound the next day. It was fairly obvious to me with some medical knowledge what was happening and the fact that the clinicians had encouraged my husband to come to the clinic with me indicated that the news was not good.

And so started the rollercoaster of treatment. We decided immediately to have a mastectomy as I had cancer in three lymph nodes, but the night before the surgery I saw my oncologist for the first time and he thought he could detect an enlarged lymph node by my collar bone, so he decided I should have chemotherapy first before surgery. So the following week I had an appointment with an oncologist specialising in chemotherapy to determine the recommended treatment for me and a chemotherapy education session with an oncology nurse. The few nights in-between being diagnosed and actually starting treatment seemed to take forever. Finally I started a regime of chemotherapy involving four rounds of three-weekly FEC (fairly heavy duty chemo) followed by 12 weeks of Taxol which was much milder. The first FEC treatment affected me the most physically (quite nauseous for a week although didn’t actually vomit, and pretty much bed-bound for that time) but after the first one they added in more anti-nausea expensive drugs which helped dramatically. I had a great wig and wasn’t worried about the hair loss.

I am incredibly lucky in that I have a wonderfully supportive and hands-on husband and four great girlfriends (who were also my bridesmaids) and they and my extended family all rallied to look after me and my three kids while my husband continued to try to look like he was still working! I also had a small group of good friends and colleagues in Christchurch that helped out with meals and babysitting too.

I must make special mention of my husband in that right from the start he maintained that ‘we’ had cancer and he was there for every appointment and surgery and without his undying love and support of me (even when I was tired and grumpy) I truly don’t think I could have got through this. I also decided to continue working reduced hours to try and maintain some normality over those six months.

A week after finishing the six months of chemo, the next step was to have the mastectomy, which was surprisingly not painful and involved a three-night stay in hospital. That was followed a three-week rest off work then by six weeks of daily radiotherapy.

It was subsequently found out that I did carry the BRCA-2 gene which I inherited from my mother. As soon as the radiotherapy was finished I had more surgery to remove my ovaries as my cancer was found to be affected by oestrogen and the BRCA-2 gene has an increased risk of ovarian cancer. This involved day surgery and another three weeks off work with no lifting.

It was also later found that I was HER2 positive which meant that my cancer would respond to Herceptin, so I started a years' worth of three-weekly intravenous chemotherapy treatment. As soon as I had waited the recommended eight months after the mastectomy/radiotherapy (to allow the skin to repair as much as possible) I arranged to have my consultation with the plastic surgeon to have implants inserted. This surgery involved preventative removal of the other breast and expanders inserted under the pectoral muscles to then be gradually inflated (like a water balloon!) to stretch the skin and muscle to allow space for the implants to be inserted.

The morning after the surgery the surgeon came in and wasn’t happy that the expanders were ‘level’ (due to the skin being so tight and damaged on one side after the radiotherapy) that he decided to do another surgery at 8pm that night to insert extra material to allow them to be more level. I was in hospital for three nights with these two surgeries but it took a good week to get over the two anaesthetics and felt like I had a vice clamped across my chest. Another three weeks off work! The expansion then took about six weeks to pump up the breasts, followed by a month to rest, and the final surgery to exchange the expanders for the implants with one night in hospital and another three weeks off work.

I have now finished my last Herceptin treatment two weeks ago and apart from one last echocardiogram to check the Herceptin hasn’t damaged my heart I will be onto first three-monthly then six-monthly checks. I had a CT scan a couple of months ago that was all clear. We had a family holiday to Fiji to celebrate the end of the treatment at last!

So that was the medical side of the story but also along the way I was interested in trying to do something for myself instead of relying on the medical profession to do everything. I was referred by a friend to the ‘Gawler Foundation’ website. They run week long retreats for cancer patients to learn about what you can do for yourself with the emphasis being on diet, meditation to decrease stress levels, the power of the mind and other sessions on the value of humour, addressing the fears around death and dying and sessions for parents with children. We decided to attend the Gawler Foundation’s NZ retreat in Wanaka This was invaluable and I still listen to my 30 minute meditation CD morning and night and stick generally to an organic, low meat, low dairy, low sugar diet. The most important lesson from this is the ability to live in the present and to make the most of every day. All of the dietary and meditation ideas are to make your body in the best possible state it can be so that your own immune system can fight against and destroy any further cancer cells.

So now that all of the medical treatment is finished it feels a bit scary not being under the umbrella of treatment. It’s now two years since diagnosis and I was given a 50% chance of the cancer returning within this time. I’ve returned to my usual 20 hours of work a week and feel that our marriage is even stronger than before.

I still have nights when I lie awake worried about my kids growing up without a Mum and who my husband would marry if anything happened to me, but most of the time I'm very positive. I love just ‘smelling the roses’ and have always been a type-A personality used to ‘doing’ things rather than just ‘being’ so it’s quite a change for me for the better.

Remember: yesterday is history, tomorrow a mystery. Today is a gift, which is why it's called 'the present'.