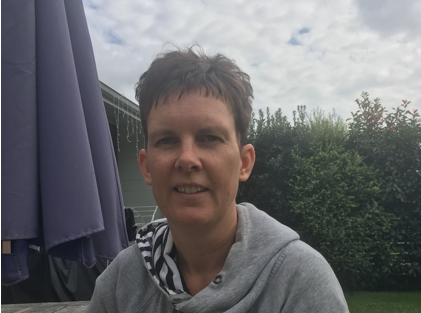 My youngest child had just turned one and he had a bit of an obsession with my boobs. He had repeatedly hit me in my right breast, causing me to bruise a little, which also made me feel my breast. That’s when I noticed a lump. I was quite a regular checker so was aware of my ‘normal’. I had just finished breastfeeding so didn’t think much of it, but thought I’d better check it out.

My GP sent me for a mammogram and ultrasound, followed by a biopsy, which found cancer.

From that day forward it was all about how to get rid of it. I had a lumpectomy, which revealed that it was worse than first thought. I had to have a mastectomy, six months of chemo, three weeks of radiation and a year of Herceptin.

From the beginning I told my surgeon I’ll have a double mastectomy and won’t reconstruct. I remain flat chested and don’t wear any prostheses. For me (and I stress “for me” because everyone is completely different and there are no wrongs in these decisions) I couldn’t really see the point in having reconstruction. My breasts had done their job, they had fed my three children and what more did I need? My breasts didn’t define me as a woman and didn’t make a difference to who I was. I believed I would still be gorgeous without them so who needed them? Besides, I was sure it was going to make it easier to be a good runner!

My plans for the future are my family. My plans are to be here to see them grow old just like anyone else really. Staying healthy is obviously a huge priority and my family is my motivation. I have a huge appreciation for how precious and amazing our bodies are and how important it is to look after them.

Early detection is hugely important - it can literally save your life. We all need to stop being blasé about it - you have a responsibility to yourself to check, get checked and know your normal.

By doing this campaign, and not hiding, I want to show people that they have options and the decision is theirs - and theirs alone - when it comes to surgery. I got so much support while I was going through this, from family, friends and strangers, I feel that this is a way of giving back and supporting a fantastic cause.

I also agreed to do it because if I can achieve getting one person to check their boobs, then that’s one life potentially saved.