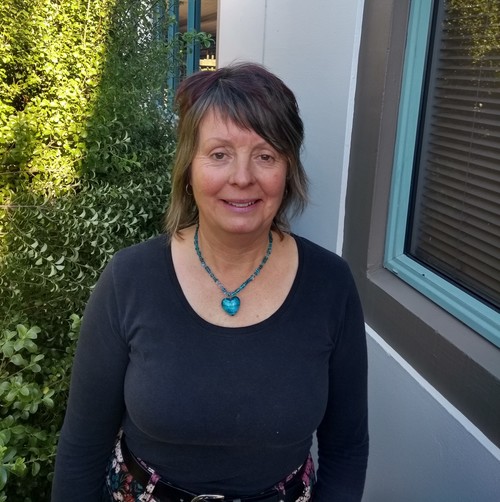 Justine's story is part of a series looking at the many and varied experiences of breast reconstruction and the decisions behind a woman's choice to have reconstruction or not.

I was diagnosed at 57 with grade 3, ER+ breast cancer after a routine mammogram in July 2018. After an ultrasound and biopsy for the first tumour, which was 18mm, an MRI found another smaller tumour near my chest wall. The locations of both tumours ruled out a lumpectomy and I had a right breast mastectomy in September 2018.

The emotions that had engulfed me with the shock diagnosis and pending mastectomy meant I couldn’t even contemplate immediate reconstruction. However, there was never any pressure to make that decision and thankfully it could be done at a later time if I so wished.

I didn’t have to have chemotherapy or radiation and was prescribed hormone therapy to take for the next five years. Of course, these come with their side effects.

I wore my temporary knitted knocker given to me by Breast Cancer Foundation NZ until my scar had healed and then purchased a prosthesis. I thought I was doing okay, but I just couldn’t accept my body as it was. Even with the prosthesis I felt self-conscious and avoided mirrors at all times. I really wanted my ‘old’ body back.

In 2019 I started researching as much as I could about breast reconstruction. Later that year I had an appointment with a plastic surgeon to discuss my options. While he and his nurse were very informative, I was glad that I went to that appointment with a bit of knowledge and understanding. It was going to be major surgery, whichever one I went with.

I’d already made up my mind to go with DIEP reconstruction. I had wanted to use my own tissue rather than implants and the DIEP flap was using skin and fat rather than muscle, which is used in the TRAM flap. An added bonus was the tummy tuck that was included!

The plastics team told me to make sure I was as fit as I could be and, if possible, build up my stamina as it was going to be a huge operation – six to seven hours – and a slow recovery to follow. Before the surgery I needed to have an abdominal CT scan. The nurse at that appointment had had the same operation I was about to have, four months earlier. She told me to “prepare to feel as if you’ve been hit by a bus”. She was right.

My reconstruction surgery was in June 2020. I was so positive and excited when the time came. This time it was my choice and being in such a better head space was a massive help. I asked the surgeon if he could make my new breast slightly smaller than my other one, so I could have a breast reduction on my remaining breast at a later date.

The surgery was major and it required a five-night stay in hospital as they need to make sure the blood vessels had connected properly in the reconstructed breast. I found that the abdominal surgery site was the most painful and I wasn’t able to stand up straight for the first two weeks.

In January 2021 I went in for more surgery to have a nipple reconstruction on my new breast and reduction on my left breast. In April 2021 I had an areola pigmentation with ‘Lady Ink’ (the most painless tattoo you could ever get).

I now feel complete again. My breasts are not twins but sisters and I am so proud of them. Reconstruction is not for everyone and I respect that, but it was the right choice for me.

If you are considering reconstruction, do your research, don’t be afraid to ask questions, take your time and be kind to yourself. I wish you luck on your journey.