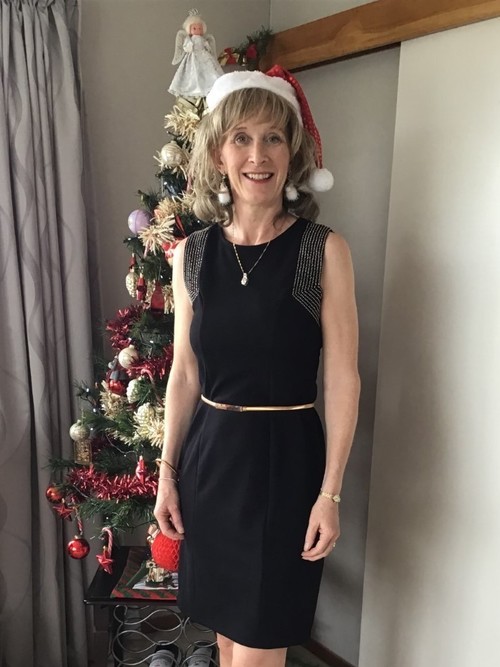 Dawn's story is part of a series looking at the many and varied experiences of breast reconstruction and the decisions behind a woman's choice to have reconstruction or not.

Dawn was diagnosed with breast cancer at 51. She originally opted to have delayed reconstruction with expander, followed by implants, but eventually decided to get a DIEP flap reconstruction. She shares her reconstruction journey…

I was diagnosed with grade 2, ER/PR+ breast cancer after a routine mammogram. It was my fourth mammogram and the last three had come back clear.

When I was diagnosed, my surgeon offered me the option to have breast conserving surgery or a mastectomy, but this changed after an MRI found more areas of concern in my left breast. The options were revised to either going flat or having a delayed reconstruction. I knew I wanted a breast shape of some form. I wanted a quick and easy reconstruction, so I straight away set my mind on an implant reconstruction.

My surgeon was worried that I might need radiation therapy, so we decided the best course of action was to have the mastectomy and be fitted with an expander. Then, if radiation therapy happened, I could have my reconstruction afterwards. Having the expander in gave me time to think about my options. I got some shape in a bra and with the right clothes there wasn’t a ton of difference to worry me.

I was happy to live with my expander for a while and I didn’t need radiation therapy, so I started investigating other options. My surgeon said that reconstruction with implants would also come with its own side effects and wouldn’t be a good match for my native breast, as the implant would sit higher and would be firmer. She felt there wouldn’t be enough volume on my back to create a new breast with a latissimus dorsi flap either. The surgeon said she may struggle with volume from my tummy too – at best it would be a B cup – but felt that she could create a good matching breast with a DIEP flap reconstruction and fat grafting.

Before my diagnosis, I wasn’t much of a hospital patient, I was generally worried about surgery, and I’d had no experience of long-term illness. But since then, I’d had a few surgeries and come through them fine. I learned that with my general good health my body was quite capable of going through a DIEP reconstruction. I also have a family history of longevity – both my grandmothers lived to their late 90s – so that was also a factor in deciding to have the DIEP flap. I thought that if I went for implant reconstruction, I would eventually have to replace it, maybe two or three times. So, my decision came down to having one major surgery now or keep having minor surgeries as I aged. I decided to take DIEP reconstruction, given the fact that I was healthy and could manage it, which put me at ease.

Going into the surgery, I knew it was going to be a long procedure, between seven and nine hours, which worried me, but it turned out fine. I knew I would have a scar from hip to hip and be in hospital for five days. I didn’t know I would be “cooked like a turkey” during my stay – they keep you very warm so that the blood vessel connects well and remains stable. The surgery does put you out of action for a considerable period of time. I was stooped over and walked slowly and tentatively for the first two to three weeks. I didn’t drive for four weeks, and it felt very tight across my stomach for several months. I also had to wear surgical bras for quite a long time and slept on my back for six weeks, but the discomfort was worth the gain.

I feel very lucky that it’s gone well. DIEP created a better body form for me and it’s so much more in-line with my natural breast. It sits so nicely and softly, it’s warm to the touch, I can lie on my stomach and it doesn’t hurt. My original expander was very oblique to look at and was very rippled. It also rotated in place, so it sat quite high and wasn’t a good look. There were definitely good reasons for the DIEP – my breasts wouldn’t have matched at all if I’d had an implant. I don’t have symmetrical breasts as of yet, but I have a reasonable match that I can live with.

DIEP is not all over and done with in one procedure either. I didn’t always want extra procedures, like fat grafting, but I’ve learned my body can handle it. It’s surgery to keep me looking feminine (which is important to me) so I’ve accepted it. I had terrible pain on my posterior thighs from fat grafting. It probably wouldn’t have been too bad if fat had been taken from my stomach, but coming from my thigh, it made it painful to sit, especially on hard seats. It took six weeks before I felt completely right. I’m having an additional round of fat grafting in June and that will be my last surgery. I know it’s my last as I have no more fat to be grafted.

I reported to my surgeon that I had a history of keloid scarring. She felt that it probably wouldn’t be a problem, but it’s something I’m experiencing at the moment. So, six months on from surgery I’m still taping my scars in the hope they will flatten out. That’s a surprise that’s come out of it, I don’t know what the final outcome will be. It might be something I decide to cover with a decorative tattoo. The surgical scar on my breast is also different to what I expected. I expected it to be one straight scar across my breast, the same as what I had after my mastectomy. Instead, it looks like an open tulip shape, and my tummy flesh is there and visible on the breast. I’m satisfied with the reconstruction so far, but there’s still more work to do. I’m waiting for nipple reconstruction and areola tattooing.

If you’re worried about implants rotating or having to be placed at a certain time, using your own fat and skin is a good option. Your body isn’t going to reject it and it sits more comfortably. It’s a longer lasting and more natural reconstruction. I’ve got some feeling back in my breast but it hasn’t gone back to being an erogenous zone! Overall, I’m glad with the choices I have made.