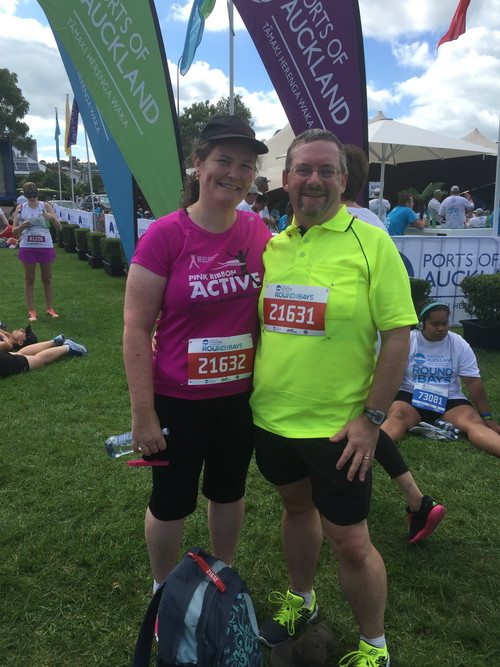 Hundreds of you went the extra mile to raise money for BCFNZ during October, but not many people racked up as many kilometres as Fiona, who ran the Auckland Marathon to cap off a massive year of fundraising.

Fiona was diagnosed with a rare type of breast cancer in 2015, a diagnosis that woke her, and her husband Tim, up to the sedentary lifestyles they were leading. They were, as she describes it, “very committed to being couch potatoes.”

After treatment, Fiona and Tim decided to set some big hairy, audacious goals. They were going to get active, and mapped out a year of running, which would culminate in the 2016 Auckland Marathon. Fiona had thought she’d quite like to do a marathon someday, but her cancer diagnosis made her realise that “there’s got to be a point where you stop putting things off, and actually seize life by the horns.”

Fiona and Tim decided to start small, with a 5k Fun Run in Botany. They followed that up with Round the Bays in March, and hit their stride in the Mt Maunganui Half-Marathon. Three weeks ago, they topped it all off with the full marathon.

“It was the terror,” Fiona says, “of actually having to run a marathon that kept us going during training.”

Fiona blogged about the experience on her fundraising page, to help keep her accountable. She was excited to find that being open about her goals helped others set goals of their own, a rewarding experience she hadn’t expected at the outset.

The actual day, Fiona says, was brilliant. She and Tim managed to keep their pace up and blast past their first goal: to run across the bridge before the bus came to pick the tail-enders up and give them a lift. Their overall goal was to cross the finish line in less than six and a half hours.

In the end, they crossed the finish line together in six hours and six minutes, knocking 24 minutes off their goal time.

For Fiona, taking on the challenge with her husband was one of the most important parts. “If one of us stopped the other would stop. The journey through cancer was together, he came to all but one of my appointments. We chose to do life together, and part of that journey was knocking off the marathon.”

“Cancer was huge, but it always felt like something that happened to me. The marathon helped redeem the year a little bit, in the sense that it put me back in control. It helped me see what I was capable of, regardless of everything else that happened.”

Fiona and her husband Tim are just one example of the wonderful people who choose to fundraise for us every year. To everyone who joined the Pink Ribbon Active team, walked in the Pink Star Walks, or held an event to fundraise for us, we thank you. It’s only with your dedication that we’re able to continue our work, funding research and education, and providing support for women and men with breast cancer.