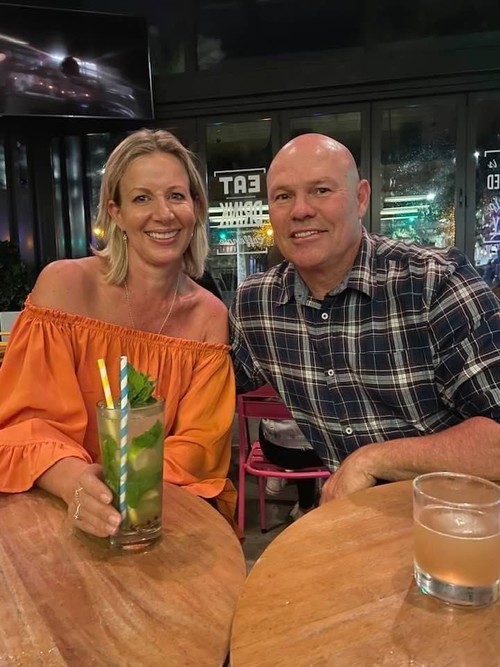 Niki's story is part of a series looking at the many and varied experiences of breast reconstruction and the decisions behind a woman's choice to have reconstruction or not.

Niki was diagnosed with breast cancer two days after her 48th birthday. She shares her experience of immediate reconstruction with implants.

My family has a strong history of breast cancer, so I’ve had mammograms and ultrasounds since I was 30. I was diagnosed at 48 with stage 2 breast cancer, after I was called back after a mammogram. My last mammogram had only been 12 months earlier and had come back clear, but since then I had developed two lumps and it had spread to a lymph node.

When my cousin was diagnosed four years before me, my husband and I discussed what we would do in the event that I was ever diagnosed. My cousin had a partial mastectomy. We decided then if I were ever to get a diagnosis of breast cancer, the best option for me would be to get a double mastectomy for peace of mind. So in a way the decision had already been made in advance.

At the time, my focus was on getting the cancer out of my body. The timeframe from diagnosis to surgery was only two weeks, which does not really give you enough time to consider all the options because decisions had to be made quickly. My surgeon told me that natural reconstruction wasn’t an option for me. I’m quite active and did not have enough fat on my tummy or my back to create two new breasts from natural tissue. I also wanted a quick recovery, which may have been why other options weren’t discussed in great detail.

My breasts were originally small (12B cup), but I think my husband quite liked the idea of maybe going bigger. I remember saying to the surgeon he could decide the size, because it didn’t really matter to me. He chose one size larger than I was originally.

I had a double mastectomy and reconstruction with implants in the same surgery in April 2019.

As is normal after a mastectomy, I left hospital with drains on both sides. They took a long time (more than four weeks) to finally stop draining fluid. In fact, when they took the last drain out, it was still collecting fluid. But I was scheduled to start chemo within a short time so they had to remove the drain so that the site could heal before chemo commenced.

In between the drain being removed and chemo starting I developed a seroma, which was essentially all the fluid building up with nowhere to go. The site was very red, itchy and infected. My specialist sent me straight to Middlemore Hospital Plastics Unit because they thought the implant may have to be removed and the infection cleared. Thankfully after three days of IV antibiotics the infection cleared up without the implants having to be removed, and I was cleared to start chemo.

I didn’t really consider at the time how different implants might feel to natural breasts. I thought they would soften up a lot more than they have. I’m also a tummy sleeper and it took a long time and a lot of perseverance to feel comfortable sleeping on my tummy. It was like sleeping on a pair of tennis balls, and it still isn’t entirely comfortable. On the positive side (and it’s taken me two years to reach this point), they do look quite nice and perky, and at least I know they’re not going to end up looking like a pair of socks! I’ve nicknamed them Thelma and Louise.

My mother had a single mastectomy over 20 years ago. She was very big busted and it left her quite uneven. A few years ago she was offered a reduction on the remaining large breast and reconstruction for the flat side. They took fat from her back area. She had a lot of problems with infections, repeated hospital admissions, more complicated surgeries and its left her back covered in a lot of nasty scars. So I’m glad in a way I didn’t have a natural reconstruction because of what Mum went through.

My advice to women looking into implant reconstruction, is to check out all the options. While natural tissue would have been softer, it does leave you with quite a bit of scarring to contend with. I know ladies who’ve had ongoing physio and even cording on their scarring.

To be honest I have had a love/hate relationship with my implants. However, because of my strong family history and my active lifestyle, I feel on reflection that the decision was the right one for me.