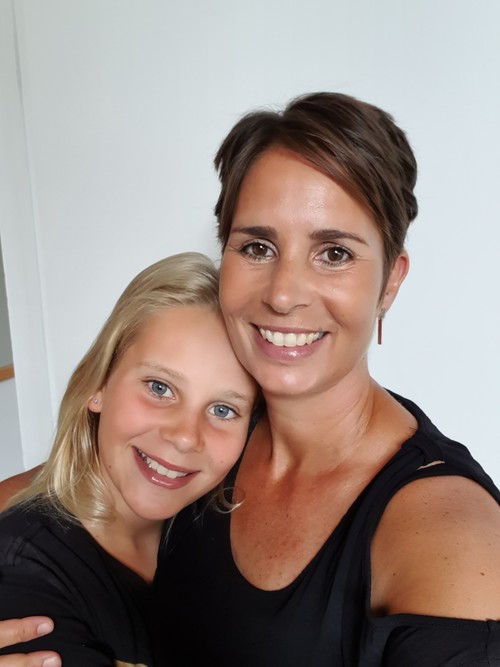 Natasha was 41 when she was diagnosed with HER2+ breast cancer three years ago. She speaks out about facing her breast cancer journey as a mum with two young children, and how her family motivated her to come through the other side as a stronger woman.

I was lying in bed at our bach during Auckland Anniversary weekend in 2017 when I started getting a shooting pain in my breast. It prompted me to have a feel, and I asked my husband if he could check it out too – that’s when we discovered the lumps. As soon as we got back to Auckland I saw my GP. The next day I went for a mammogram and also had an ultrasound and biopsy. I was utterly shocked when they found three lumps in my breast and told me the cancer had spread to my lymph nodes.

Two weeks after receiving the diagnosis I had a full mastectomy. I’d decided not to do reconstruction at the same time because I wanted to focus on getting through the chemo and radiation. It ended up being the right decision because I wound up with a blood clot and had issues with bad nausea and pain.

Going through the treatment was very hard, I wouldn’t wish it on my worse enemy. I had 20 weeks of chemo, then 13 additional weeks of Herceptin and Perjeta, and then three weeks of radiation. I got to a certain point where I thought I couldn’t do it anymore, I was so sick. My children were seven and 10 at the time and it was heart-breaking they had to see me so poorly, but they also gave me the strength to keep going.

I did everything I could to maintain a sense of normality for them. I would set myself a goal to get up in the morning and get them organised and off to school, which was a massive effort. I’d end up back in bed to recover. But seeing their faces was worth the effort so I tried to do the same when they came home from school.

When you have kids, you have to dig really deep. The hardest thing was missing out on all the things you would normally do for your children. Going to all of the sports games, driving them places, watching them take part in things. When they’re that young all they want is their mum, so it was devastating not always being able to be around for them.

I finally had the reconstruction done last November. It kept getting put off due to various health complications. But now I feel like I’ve finally turned a corner. It’s been a long three and a bit years but I’m feeling a bit more like a normal mum now. Well, my ‘new normal’ mum.

I think the children have done extremely well because we were honest with them from the beginning and we made them part of the journey. They never came to chemo or radiation or anything like that, but we kept them in the loop as much as possible.

The resources that were offered to me by Breast Cancer Foundation NZ (BCFNZ) were incredibly helpful, not only for me but also the kids. The books are just fantastic for explaining cancer to them. I’ve shared them all with friends who are also going through breast cancer. BCFNZ’s ‘mybc’ app was also a useful tool for answering questions or just knowing there are others out there that feel the same as you, and knowing you aren’t alone.

I think going through all of this has made my kids even more compassionate and helpful around the house. My daughter was pretty emotional seeing me lose my hair, and my boob. But she loves my new boob, so that’s good!

I’ve told them for Mother’s Day this year I don’t want a present, just a card that has had some effort and thought put into it. I’ve kept all of the cards they’ve made me as they are so special to me. And my daughter has learnt how to make a proper coffee now (while in lockdown), so I’m really excited I might get a coffee in bed. Maybe even a home-made pedicure too, which she’s also very good at. Right now, I guess it’s about being creative with what you have at home.

To other mums who are affected by breast cancer, I’d say: Take the time out for yourself and say yes to help. Enjoy a day of pampering or being cooked a meal. Embrace your family and enjoy the love you have surrounding you. Although it may feel like you can’t do anymore, you can. You’re strong and you can make it through.

Natasha lives in Saint Johns, Auckland, with her husband Troy and children Tyler (13) and Maddy (10), and dog Cooper.