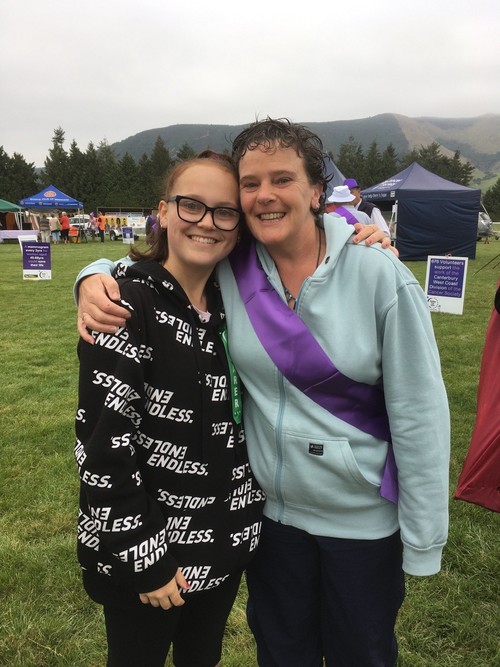 Marion is a 46-year-old mother of three from Timaru who is volunteering for the Pink Ribbon Street Appeal for the first time. She was diagnosed with lobular breast cancer in October 2019, after her first mammogram detected a tiny lump. This was at a time when she was already facing other serious health problems, as well as just having lost her father to cancer. A year on from her diagnosis, Marion is now urging other women to be vigilant about their breast health because catching her cancer early is what saved her life.

I do a lot of driving for my job as a hygiene technician. One day I kept hearing an ad on the radio all day that asked women over 45 to go for a free mammogram. I realised I fit into that group so I thought I’d better go and sign myself up. I didn’t think anything of it – I thought I wouldn’t get an appointment for six months – but the following day the nurse at my GP’s office called me and said I was eligible. Two weeks after I signed up, I had my appointment. It was really quick; I wasn’t expecting it to be so soon.

About a week later I got recalled for another set of scans to be done, as well as an ultrasound. They didn’t tell me that there was anything to be worried about at the time. Then my doctor made an appointment for me to go to the breastcare unit at St George’s in Christchurch. I had a biopsy done and still didn’t think anything of it. A week later I got recalled to have another biopsy, and then I got an appointment to see a doctor at Timaru Hospital. That’s when he told me I had lobular breast cancer. It happened very quickly – it was within four to six weeks from when I first had my mammogram. I was in a bit of shock because the day the doctor told me I had breast cancer I had other issues going on as well. I had a blood clot in my leg that I’d seen the doctor about because it was painful and swollen (which was unrelated to my breast cancer).

The lump they found was tiny, it was only 0.7mm. I had a hookwire surgery in November where a biopsy took the cancer out, and then another surgery in December to remove the rest of it. I had been through a lot of trauma at the time, as I had three surgeries in four weeks; I had hit rock bottom health-wise. I had a hysterectomy just before my breast surgery (unrelated to breast cancer), so all up it was an awful time. I’ve still got blue dye on my breast, which I’ll have for about two years.

I’ve been given the all clear – for now. I’m classed as high risk because I’ve got these markers that, if I get breast cancer again, it will be aggressive and they won’t be able to stop it. So I’m going to be careful and play it safe. If I notice anything different I’ve got to tell my breastcare nurse straight way. I’ve learned all the symptoms and I’m really careful now – I do a self-check a couple of times a week. My breast has been sore lately and I found a lump, so my mammogram, which was due at the beginning of October, was brought forward. Nothing showed up, so they think it’s just scar tissue from healing; they said I’d have pain for quite some time. It was quite scary to find the lump, and now I’m very self-aware – I don’t want to mess with things like that!

Sometimes I go into a state of denial about having breast cancer because my lump was so small. I try not to think about having it. The way I see it, is there are a lot of people who have cancer who are way less better off than I am. They could be terminal and might only have days, weeks or months left. I didn’t have chemo or radiation and other people are having to go through that. I do see things in a different way than I did before. When you hear the word ‘cancer’, it’s so scary and stigmatised; people look at you and treat you differently. It’s hard to explain if you haven’t been through this situation – people will tell me they understand, but they haven’t experienced it.

Telling my family and having them look at me differently was the hardest part of my journey. They were supportive and I’ll answer my children’s questions – how I’m feeling, what it was like – because I don’t want to lie. I’ve been very open with them. But it was a bit of a shock. My daughter was upset because my dad had passed away from prostate, bone marrow, head and neck cancer just a week before I was diagnosed myself. It was really tough watching him go through his journey, but mine was nothing compared to what he went through. It’s hard as I can’t share with him how I feel. He would have understood.

If women find anything abnormal, I would encourage them to go and get it checked out. It may be nothing, but it could be something, so it’s better to know. It’s not only for their health, it’s also for their families. Because even though I’m the one with cancer, it affects my family too. If they’re in the age group for free mammograms, sign up to the programme. It’s a free service so you want to make the most of that. This is your health and nothing is more important.