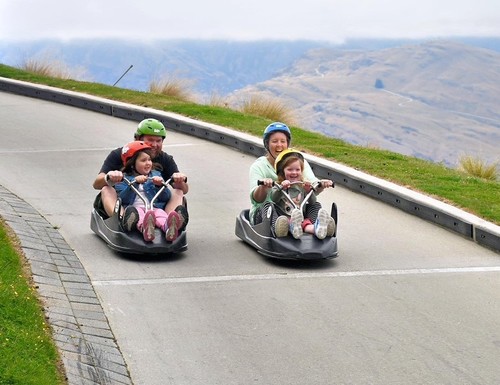 Nicola's story is part of a series looking at the many and varied experiences of breast reconstruction and the decisions behind a woman's choice to have reconstruction or not.

Nicola was 44 when she was diagnosed with ER/PR+, HER2- breast cancer. She wanted to go flat but was told the option wasn’t available. She shares her experience.

My mum was diagnosed with breast cancer at 34 so I’ve always been vigilant. On the morning of 11 January 2021 I raised my right arm and noticed dimpling on my breast. I was due for my yearly mammogram in February but I had to get checked as my mind was racing. I managed to see my GP that same day, who agreed to refer me for a mammogram at the breast clinic. I received a call the following day and I made an appointment for 13 January. They noticed a difference in the ‘architecture’ from my previous scan so I went straight on to have an ultrasound. The radiographer praised me for noticing such a change and said there was a mass, measuring about 17mm. I then had a core biopsy and arranged an appointment for Monday.

After a frantic call to my partner, we arranged time-off and childcare and he held me hand through the five samples they took at the appointment. They said my GP would have the results by 21 January at the latest. The day before my GP appointment, I was home alone with my daughters when my GP called me. My usually bubbly, joking GP wasn’t himself and asked who was home with me. I said, “Just the girls. We’re coming in later for the results, but if you’re calling it’s not good, is it?” He told me it was cancer and my heart sank. He said he found out at 10pm the night before but didn’t want to worry me at that hour. He gave me his cell number if I needed anything and told me he had made an appointment for me with a breast surgeon that Friday. I hung up and cried, then rang my partner, told him to pull over then blurted out I had cancer. I also called my dad, brother and sister. They all showed up, with my giant of a younger brother carrying a watermelon (Dirty Dancing quotes made me laugh), but no one knew what to do. They looked after my kids while my partner and I went for a hot chocolate. On the way home, I called my employer and they said to take my time.

On Friday I met with my surgeon and was told it looked like I had invasive lobular carcinoma, but they couldn’t confirm it without an MRI. The MRI went fine, although it was strange lying face-down with my boobs dangling, but that’s the nature of the beast – it’s not pretty. At my follow-up appointment with the surgeon, she confirmed it was stage 1 invasive lobular carcinoma, with a tumour about 15mm. I was given two options for surgery. Option one was to have a mastectomy and sentinel node biopsy with reconstruction at the time of surgery and option two was to have a mastectomy with sentinel node biopsy with no reconstruction. I asked for option three, which was a double mastectomy and sentinel node biopsy. With my family history, I thought this would be the best option for me.

But I was told that I had two options, not three, and that healthy breasts weren’t removed ‘just in case’; I could have reconstruction if I wanted but not both breasts removed. I felt defeated. I just wanted to be flat to have symmetry, balance, less risk and one recovery. I have two young children, one of whom was in a wheelchair from her recent hip dysplasia operation, requiring me 27/4 for her recovery. My partner and I were both out of leave after caring for her, so I couldn’t have 12 weeks of recovery for reconstruction. I had three friends who have also been on this journey. All three had reconstruction and two of them wished they were flat, after facing extra surgeries, fat dispersing, implants going down and general discomfort. One has had a preventative double mastectomy due to having the BRCA gene and has gone through four surgeries in six years. I wanted to live – I didn’t want to miss out on time with my kids because I was sick or out of action.

I had surgery on 11 February and I was so grateful to have medical insurance so I could go privately. I was petrified I wouldn’t wake up from the anaesthesia, but I woke up afterwards, drains dangling, exhausted but alive. My pain was well managed but I felt so angry that I would have to do this again if I wanted to be flat and symmetrical; I just wanted to be flat, not this uni boob. My first shower was emotional. I remember sitting hunched, asking the nurse to cover the mirrors as I wasn’t ready to see my disfigurement. She obliged and I cried the whole shower.

At my follow-up appointment, I was told they had found two masses – 15mm and 25mm. I had clear nodes and clear margins. I was sent away being told everything looked great but I felt odd. I couldn’t wear my Knitted Knocker as the pressure on the wound even after three weeks was too much. I was left with a D-cup on the left and flat on the right – my kids told me I was a unicorn, which was their way of dealing with it. I started physio three weeks after surgery, which I found good and bad. It was good for helping my range of motion but bad as I felt judged for not wanting reconstruction. I was flat out asked “what are you going to do with that side, you need to wear something!” I tried to wear a crop top, but it dug in under my arm, leaving an indent. The leftie was just so heavy, it choked me with what I’d wear if I tried to support it.

I saw a cancer counsellor who told me that my choices are my choices and that I needed to take back some of the decisions I felt I had lost. We had a month before my next appointment with the surgeon and we had planned in advance to take the girls to Queenstown for my youngest’s fifth birthday. It was great timing – I wasn’t going to be a spectator anymore. I took my five-year-old on her birthday down the luge. It might have been slower but I took the ride of my life and it felt great. I needed to rest after it, but for two hours I managed a few rides as a mum, not a sick mum. When I saw my counsellor after that trip she told me that I looked different. She told me, “The last time I saw you, you were clutching the heart pillow looking wounded from a war, lost and sad. Now you have a glow like you’re ready to go head on into anything”. That was my last session with her. I needed to take back the power.

I had my last appointment with my surgeon on 25 March, who told me I had done it. I was cancer-free and didn’t require any other treatment, except five years on Tamoxifen. I felt like I’d won the lotto – no chemo, no radiation, just a pill. I was asked if I would like to come back to get a prosthesis as it would give me symmetry. Symmetry was what I wanted when I asked to have both my breasts removed, so my clothes would fit instead of being twisted by the other full side dragging it down or across, so I could lie in bed comfortably, so I could choose to wear a prosthesis or not. My breasts have served me well, they have fed four children (I donated milk to two more children), but they are a liability. My surgeon said I could revisit the request in 12 months if I still wanted it, but financially it will take a couple of years to build up the leave to afford to be off work again. Why is reconstruction an option for symmetry but flat isn’t? It feels like women must have boobs and flat isn’t an option, as it’s not how women are perceived.