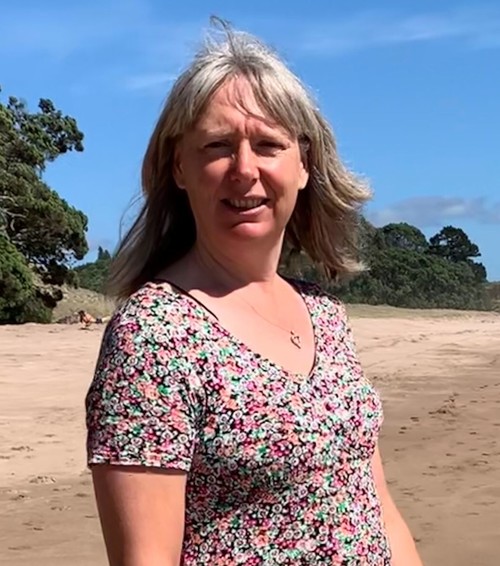 Lynn's story is part of a series looking at the many and varied experiences of breast reconstruction and the decisions behind a woman's choice to have reconstruction or not.

Lynn was diagnosed with breast cancer at 49. After breast conserving surgery with unclear margins, she had a mastectomy and implant reconstruction. She shares her experience and her advice for other women.

I was diagnosed at age 49 with stage 1 invasive ductal carcinoma in my left breast in May 2020. I had a wide local excision and sentinel node biopsy early June and the plan was to have radiation 6 weeks later. However, when the pathology came back it the tumour was stage 2b and surrounded by DCIS with no clear margins. There was no lymph node involvement. They operated again to take bigger margins, but still could not get clear margins, so they advised that a mastectomy was probably the best option. Due to the fact they were removing all breast tissue radiation was no longer needed so I was able to get an immediate reconstruction, with a reduction/lift on the non-cancer side to match.

I was referred to a plastic surgeon for an urgent consult so they could proceed with the mastectomy as quickly as possible. The plastic surgeon assessed me and said I did not have enough tummy tissue for a tummy flap procedure. I was an DD/E-cup prior to surgery and the best he thought he could manage would be a big A/small B cup. He also said I didn’t have enough tissue on my back for a latissimus dorsi flap either and that left me with only one option to have an implant.

Recovery time was advised as six weeks, at which point I should be able to return to work on full duties. By 12 weeks I should be back to being physically fully fit again and able to resume my normal physical activities – horse riding, weights, yoga, farm chores etc. My healing time was uneventful, but slow and I ended up taking eight weeks off work and then returning on light duties for a further month or two. I was still struggling with fatigue so I then took five weeks off over the Christmas break and returned full time on normal duties in February 2021.

At my eight-week post-op appointment with the plastic surgeon, she thought my range of movement in my shoulder was a bit limited so suggested I get some physio on it. I applied for Breast Cancer Foundation NZ funding to get some physiotherapy and had four sessions with a PINC&STEEL physiotherapist to help me. This sorted out my shoulder and my range of shoulder motion is now good. I am eight and a half months’ post-mastectomy, but I am still having ongoing issues with my pectoral muscle. It causes me significant discomfort and limits my physical activities. My breast feels very tight and I can’t load up my left arm at all, which is a wee bit of a problem as I am left-handed. This makes even routine day-to-day household activities a bit of a struggle. Animation in my breast when I use my pec muscles is also uncomfortable. I am slowly trying to ease back into some of my normal physical activities but have to be very careful not to do too much or I will pay for it for the next two to three days.

My advice for anyone considering reconstruction is to do your research, ask lots of questions and always take someone with you to appointments. They give you lots of information which can be overwhelming and you will have trouble retaining even half of it.