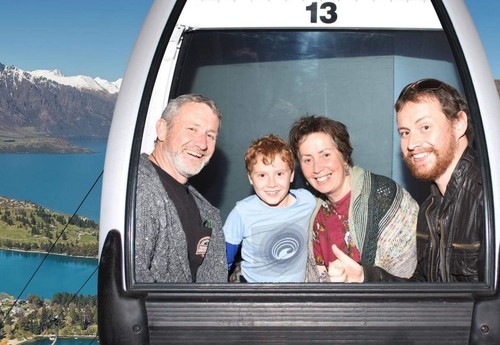 Biddy (Ngāi Tahu) had a double mastectomy last year at the age of 49, after her second screening mammogram detected a lump in her breast. She says she owes her survival to the free mammogram she made herself go to, and now wants to spread the message about the importance of going for regular mammograms and doing self-checks, especially for Māori and Pasifika women.

I was diagnosed in July 2019 after having a routine mammogram at a mobile screening unit in Alexandra. At the time, I was very busy working as a locum midwife in Queenstown and doing a lot of travelling. I was due for the mammogram but hadn’t really wanted to take the time out for it. I had to do lots of rearranging of my work schedule but managed to ft it in.

Once the mammogram had detected something concerning, I was sent to Dunedin for a biopsy, scan and another mammogram. Then they invited me to meet the surgeon without telling me I had cancer. Thank goodness I had my husband with me!

Working in women’s health, I’m aware of the cancers women can get. I’d found a couple of lumps in my late 30s and early 40s, which turned out to be filled cysts. But I was a well woman with no lumps or bumps and I self-checked, so I wasn’t expecting to be told it was breast cancer.

After the tests it took them a while to get back to me. As a midwife, I booked in women a month ahead, and I thought there was no point in doing further bookings if it was cancer because I’d have to stop working straight away. I had two bookings for the day before they were meant to be giving me a call, but I thought they must know by now. So I just called them, and they told me over the phone I had grade 2 ductal lobular breast cancer.

I had my first surgery, a partial mastectomy, in mid-August. They took the very small cluster of cells out, but couldn’t get clear margins. They also realised I had triple negative breast cancer – the MRI I’d had before surgery had missed this. The MRI also hadn’t detected the size of the lump – it ended up being double the size of what was shown on the scan.

They wanted to take out more of that same breast, but I wasn’t happy with that as they’d told me I had two types of cancers. I saw it as a high chance of coming back in the future or in the other breast. So, I opted for a double mastectomy and the surgeon was happy with that. I thought it would save a lot of worry and potentially further surgery, plus I didn’t want to be lopsided. I had that surgery on 4 October.

I didn’t have chemo or radiation, which I would’ve needed if I just had the partial mastectomy. If I had to have radiation, it would have involved being away from home for six weeks, so that added to my decision.

It was really stressful at the time but as a midwife working in women’s health, I’m a good advocate for myself. I made sure my support was in place, and took the time to take it easy and not worry about other things. I’m 50 now and I’ve breastfed all my kids, so it hasn’t been an issue for me what my breasts look like – I haven’t worn prosthetics either. I’m feeling very positive about the future.

Look after your health

I owe my survival to the mammogram. My type of cancer develops in strands, rather than a lump, so by the time you detect a lump (if you’re not sticking to regular mammograms), your cancer could be further on. I don’t know how long it would’ve taken to feel a lump; I might have discovered it at a much later stage. Because I caught it on a routine mammogram, it was found early enough to result in a really good outcome for me. If I’d caught it later, I could have had to go through chemo and radiation. I could’ve easily said no to the mammogram, I’m too busy – but we’ve just got to suck it up and just do it.

Self-checks are also important, so you get to know the unique anatomy of your breasts and therefore, you’re more likely to know when there’s changes.

I recently retired from midwifery as the stress wasn’t doing my health any good. I’ve now taken on the role of kaimahi mauri ora (Māori health worker) at Uruuruwhenua Health. It’s a non-profit organisation that provides healthcare and advocacy for whānau in Alexandra. It’s a gap-filler in the health system, that helps people who feel like they’ve missed out or need help navigating the system. We work with a Māori world view and kaupapa. I’m Ngāi Tahu myself and I’m aware that Māori and Pasifika women have worse outcomes for cancers right across the board. Because our stats aren’t as good compared to non-Māori, it’s so important to be aware of self-checking and to stick to getting regular mammograms.

Biddy is 50 and lives in Roxburgh, Central Otago with her husband of 30 years, Brendan. She has three grown tamariki (children) and a nine-year-old mokopuna (grandchild), Kairo.