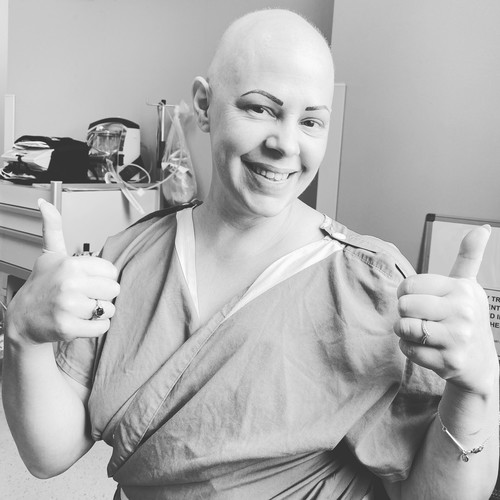 Kristy is a two-time survivor of ER/PR+, HER2- breast cancer. She’s now hosting a Pink Ribbon Breakfast to help raise awareness about breast cancer and find a cure.

I was first diagnosed with breast cancer in 2013. I had not long finished breast feeding my youngest child and thought I had a problem with my milk ducts. I noticed pain in my left breast and my nipple started leaking. My doctor referred me for a mammogram which came back clear, so I wasn’t worried. I had a biopsy which came back inconclusive, but an ultrasound showed I had two lumps in my breast. A second biopsy confirmed I had ER/PR+, HER2- breast cancer. Because the lumps were slightly different, I had to have a full mastectomy. I was then meant to have six rounds of chemo but managed to stop after five.

I then had to decide on whether to go ahead with radiation or not – that was tough to do at the end of chemo when I was feeling so horrendous. I chose not to have it but I now wonder if that was a factor in the cancer coming back.

I went on Tamoxifen for four months but didn’t tolerate it well so went off it. I was fine for some time and then in 2015 had a TRAM flap reconstruction. I was going for annual mammograms and at my last one in August last year they discovered a new tumour. I was terrified about having to go through it all again. I had another surgery, then went through four rounds of chemo and three weeks of radiation. I’m now on Zolodex injections every three months and take letrozole tablets every day. Three weeks ago, my nipple started leaking again but an MRI came back with the all clear, there’s no signs of any cancer left.

I’m so thankful I don’t have a terminal diagnosis, but sometimes being a survivor can be hard. I found going through the treatment again really challenging. I feel like an 80-year-old woman most days as my body adjusts to the hormone therapy and the joy of early menopause. I’ve got lymphoedema now which means I can’t continue working as a hairdresser. I’ve had to dig really deep to find the positives. Now I take the time to be still and enjoy the little things, like watching beautiful sunsets. Sometimes people will see me and say that I look amazing, but the reality is when I look in the mirror I don’t recognise the person looking back at me. The journey is something I have to live with every day.

I’m fundraising for Breast Cancer Foundation because I want to do my part to help find a cure. I don’t want my daughter or anyone else to have to go through this. Around the time of my first diagnosis I hosted my first Pink Ribbon Breakfast with a dear friend who not long after was given a terminal breast cancer diagnosis. Breast cancer is unforgiving..

For a while I didn’t want anything to do with cancer – I’d lost three friends to secondary breast cancer and I couldn’t face it anymore. But now that I’ve gone through it again, I want to make people aware about breast cancer and how important it is for women to check their breasts.

Pink Ribbon Breakfast is such a great way to raise awareness while having some fun and creating some good memories. There are so many moments you can’t laugh about when you go through breast cancer, so it’s nice to be able to get together with friends and have a good time. I’ve come a long way with my own journey, so now I want to do something to make other people’s journeys a little bit lighter and easier.

Kristy is 42, lives in Whanganui and has three children – a 15-year-old daughter and two sons age 12 and 8.