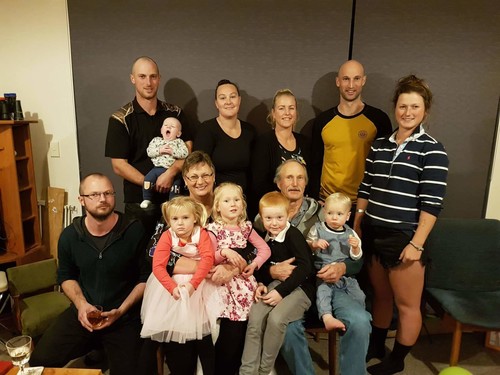 Barbara is a 60-year-old grandmother from Whangarei who went through breast cancer for the second time last year, after being more than 10 years clear of it the first time around. On both occasions she was lucky to catch it early and have successful treatment. Now she’s hosting her third Pink Ribbon Breakfast to give back for the support she received, and raise awareness about the importance of early detection.

In 2009, one of my friends who owned a café was hosting a Pink Ribbon Breakfast that I was going along to. As a nurse, I’m well aware of the symptoms of breast cancer and how to look for them. It was pure coincidence that I found a lump that morning of the breakfast.

I took myself off to the doctor and it did turn out to be breast cancer. I was very lucky that it was small and caught early. I’d been going for regular mammograms and they’d always come back clear. I had been six months short of my next mammogram when I found the lump. There was no history of breast cancer in my family.

I took a year off work while I went through my treatment – I had a partial mastectomy, radiation and chemotherapy and then was on Tamoxifen for four and a half years. When it had all finished I felt a bit lost. While you’re on treatment something is happening and you have people looking after you. But then when it finishes you’re just left with the worry that it will come back.

In 2019 my husband and I took a Senior Gap Year (12 months off) to go travelling around the South Island in a caravan, as we have children living down there. In July 2020 we were near Christchurch and getting ready to come home when I noticed a lesion on my skin, an inch above the scar line of my breast surgery. It looked like a little bite and it wasn’t sore or itchy at all. But it didn’t go away, so I saw a doctor about it. I’ve got two sisters who’ve had melanoma so I was worried it could be that.

With breast cancer always in the back of my mind, my GP sent me for a mammogram and ultrasound just to be safe and both came back clear. The radiologist couldn’t see anything in the breast tissue at all; whatever it was, it was only skin-deep. I saw a surgeon who decided to remove the lesion, but he didn’t think it was melanoma or cancerous.

A couple of weeks later as were packing up the car and getting ready to return to Northland, I got the call with the results – it was a recurrence of my original tumour. The surgeon wanted more investigations done quickly to check that it wasn’t more widespread, so we stayed put in Canterbury to get an MRI and CT scan done. Thankfully they both came back clear.

After full discussions with my medical team about possible treatments, I had a further excision to remove the rest of the tumour, and then we were able to return home.

I’d made it 11 years after my initial diagnosis and thought I’d beaten breast cancer, so it was a total shock to find out it had returned after being well for so long. The first time around I remember thinking breast cancer wouldn’t kill me. I had four children, the youngest being 12 at the time, and I wasn’t going to entertain that thought. I couldn’t help but think differently the second time around, so I was more than relieved when my scans came back clear and it wasn’t advanced breast cancer!

In November I started on hormone therapy which initially made me very tired, but that is now settling. I still don’t have as much energy as I used to, I have to pace myself a lot more now. I’ve just started working again part time and I’m being very careful not to over-commit myself.

I’m really thankful for the funding I’ve had from Breast Cancer Foundation NZ for counselling and physiotherapy, as well as the phone calls from the nurses giving me reassurance and advice. I thought hosting a Pink Ribbon Breakfast was a good chance to give back for the wonderful support I’ve had, and I really enjoy any excuse for a gathering!

It will be a high tea with family, friends and neighbours – there’ll be around 20 of us, paying a donation to attend. It’s all about doing something fun with people you want to spend time with for a good cause. It will also be a good way to remind the women in my life to be vigilant because breast cancer can happen to anyone and it’s not just lumps we need to look out for. Have regular mammograms, and if you notice anything unusual – whether that be itchiness, puckering or skin blemishes – go and get it checked out, because the earlier it’s found, the better chance you have of successful treatment.