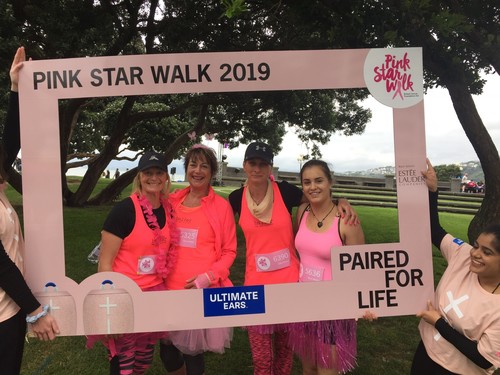 Vivienne was diagnosed with breast cancer in October 2019 at the age of 68. Vivienne had been going for mammograms ever since her early 40s, when she lost a friend to breast cancer. It was through Vivienne’s last free mammogram that her own breast cancer was detected. A few days before her mastectomy, Vivienne walked the 10km Pink Ribbon Walk in Wellington, and now she’s taking part for a second time this year.

Last year, after coming home from a lovely week’s holiday in Rarotonga, there was a message on the answerphone telling me that I needed to contact the Breast Screen Centre in Lower Hutt following my last mammogram I had in August. I was a little concerned, but I put it aside hoping that it was nothing to worry about.

The next two months moved so quickly. The follow-up mammogram and then ultrasound showed a lump in my right breast. I couldn’t feel it. I couldn’t feel it but a biopsy confirmed it was breast cancer and I was referred to a breast surgeon in Wellington.

Initially we talked about a lumpectomy but an MRI showed up two more lumps, so it was decided a mastectomy was the only real option. We discussed reconstruction but after looking into the options I decided to remain flat. I’m small-breasted anyway, so it wasn’t a major issue to me. Although my mastectomy went well, another two very small cancers were found on biopsy, a total of five in all. The larger cancer was close to my chest wall so it was decided radiation would be necessary as a safeguard.

I’ve been really lucky in that with all of the treatment I have come through really well. I had one night in hospital and was back home and walking the next day. I’ve always been a very positive person and I believe that positivity played a part in my outcome. I also felt like this was something that was manageable. Because it was my breast, it felt external and could be taken off and removed.

I’d actually started going for mammograms in my early 40s after a dear friend passed away from breast cancer. Finding out I had breast cancer at my last free mammogram came as a total shock. I know now you can never say that you’re not at risk.

At the end of August I had my first follow up appointment with my surgeon and he now doesn’t want to see me again for another year. For the next four years I will be seen six-monthly by my oncologist and surgeon and hopefully I’ll continue to be fine. I feel so blessed that I found out through a routine mammogram and was able to be treated early and come out the other side.

I walk with a group of women and we regularly do all sorts of events and challenges. I’ve talked with them about how important it is for them to go for their mammograms regularly. The stories we hear about it being painful are not necessarily true. Luckily for me it’s never been that bad. It’s just momentary pain for lifetime gain, and it’s free! It’s just something as women we need to do.

I totally support Breast Cancer Foundation NZ’s campaign to get the free screening service extended to the age of 74. My mother got breast cancer when she was in her 90s. I didn’t realise until she had it that older ladies could get breast cancer too. I always thought after 70 the risk went away, but now I know that’s not true at all.

Two days before my mastectomy, I walked the 10km Pink Ribbon Walk in Wellington with three friends. My friend’s daughter had a recent breast cancer scare and I was going through my own breast cancer journey so it was very empowering to be among so many likeminded people. I was amazed to see how many people were taking part, not just women but husbands, fathers, families, old and young. It was wonderful to see such support for such a great cause - a very powerful day.

Now I’m doing it again this year with my walking group. There are 10 of us and we call ourselves the Wairarapa Sole Mates. Cancer has touched all of my friends in one way or another and they’re doing it to support me, other family members, and the work of Breast Cancer Foundation.

I find that not a lot of people want to talk about breast cancer, so I’m speaking out because I want to raise awareness. Once I started telling people I had it, I found out so many women I knew who had been through it too but had never talked about it. It made me realise breast cancer effects so many women and I don’t want to hide away from it. I want to show that if you catch it early, you can get through it really well. If I can get at least one person to go for a mammogram and it saves them, then I’d be happy.

We all need to be vigilant in caring for our lives and having a free mammogram is such a quick and easy way for each of us to do this.