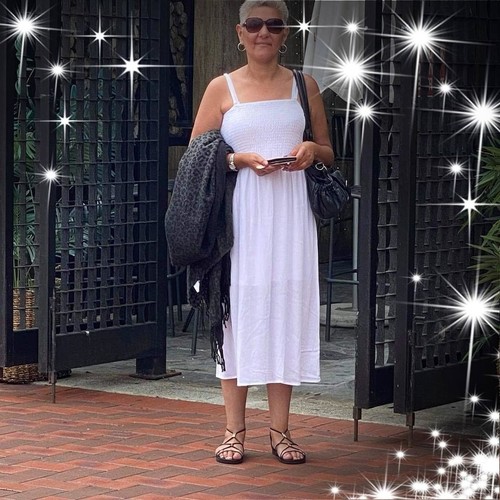 Vicky's story is part of a series looking at the many and varied experiences of breast reconstruction and the decisions behind a woman's choice to have reconstruction or not.

Vicky was diagnosed with triple negative breast cancer in 2017. She shares her experience of having trans flap reconstruction with implants.

I was diagnosed with triple negative breast cancer at 49. I’d had an itchy left breast with a wee bit of a lump that I’d thought was an insect bite. I went to the doctor to get something for it, where it was tested and I found out I had breast cancer. Once I’d had a biopsy, it was straight into oncology and straight into six months of chemo. From there, I had my left breast removed and they waited a few months for it to heal as I didn’t want breast reconstruction straight away.

I was only offered the choice of trans flap for reconstruction. I didn’t have much of an option for reconstruction, as my breast cancer was quite deep, so the trans flap was all I could really have. It took me a year to decide that was what it was going to be. My medical team wasn’t pushy about appointments – it was all done in my own time. I was given a lot of reading material, which made up my mind for it. It was all there in black and white – it’s different when you’re told something, but when it’s in front of you, it all registers and makes sense. You get told all these different things from oncologists and surgeons and doctors, and to me it went in one ear and got all jumbled up as it came out the other ear. I didn’t understand any of it until I read it and could understand what they were telling me.

A year after my surgery, I was due to go in for reconstruction and for some unbeknownst reason I decided to get the other breast checked as well. They found early breast cancer in my right breast, so I ended up having reconstruction on both breasts. With the trans flap, my surgeons gave me the option to have it done above or under the breast bone. If they did it under, they would have to put in the clamps to extend my breast and so I decided that I didn’t want that. The way they explained it to me, it sounded too painful have to go in and get the breast stretched a bit more. I also had implants put in for both breasts.

When I went in for surgery, I found it quite daunting because I sort of knew what to expect but I don’t think it actually registered properly with me – I’m the type of person who says I’m made up my mind, I’m having this and this and this. I must admit that after surgery it took a wee while to have a look at myself, but when I did I was really impressed with the work that they’d done. Since I’ve had the operation I’ve had no problems, I don’t regret any of it. I’m so glad I chose the path I did and I love the way my boobs look now.

Admittedly, when reconstruction is first done, you have eight weeks of basically vegging out at home. That’s the annoying part of it all: not being able to do anything. Everything seemed to flow quite nicely, except for that. I had fat grafting a couple of months ago, which was just an overnight stay in hospital and home the next day – it was no biggie. When I first had the implants in, it felt like they were catching under a bone, although I knew they weren’t, but once I had fat grafting it felt like nothing; it felt like having a normal boob there. All I have to do now is get a nipple tattoo on my left breast, which is nothing major compared to what I’ve been through.

My advice for other women would be to do what everyone says to do and what the TV says to do and check your breasts and go have your mammogram – don’t leave it. Definitely talk to your husband or partner and kids about it. Don’t push them away, keep them with you. They’re the ones that are going to be there once this is all done and dusted. I would also recommend the trans flap, it’s all worth it in the long run – once it’s done, it’s done. For me, it was never an option to go through life with only one breast. With this reconstruction, you’ve got a bit of a scar on your back but nobody stares at your back. That’s my journey’s scar and I’m proud of it.