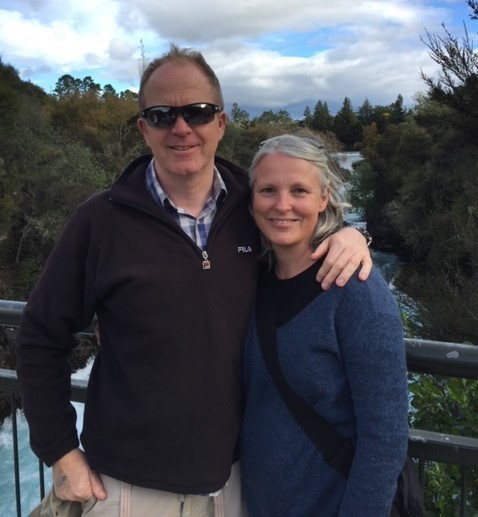 Tracy was diagnosed with DCIS (an early form of breast cancer, described as pre-invasive) in March this year at the age of 54, just before the country went into the first lockdown for COVID-19. She shares her experience of having to deal with diagnosis and then full mastectomy during lockdown, and the advice she has for other women going through the same journey.

I never check my breasts and I never have, but I felt a lump in the shower and looked at it. It was a Friday night, so I called the doctor and got an appointment on Monday. I saw the specialist the week after for a mammogram, then the Friday before lockdown I was told I had high-grade Ductal Carcinoma in Situ (DCIS). I haven’t got medical insurance, but I had the first part done privately because I wanted to get it done as quickly as possible, I feel quite lucky that I could do that.

With COVID-19, it was hard because I couldn’t meet my breast surgeon until the day of the day of my operation. They didn’t want people going into the hospital, so we only spoke on the phone. I like meeting people so I found that tough, as we couldn’t build up the same rapport. It was a stressful time waiting, as I didn’t know if I was going to get an operation until Level 3, as they were only doing emergency operations. I kept imagining the cancer growing and taking over my body; it was like having a ticking bomb inside me. I’m lucky I didn’t find it during lockdown – imagine having that in your head the whole time and not being able to do anything!

I had my operation on 29 April, the same day as my husband Mark’s birthday. He dropped me off at the door and he couldn’t even come in with me. I had one lymph node removed during my mastectomy, and it came back all clear.

I was so used to seeing my breast, that it was a complete shock not having it, but I’m happy with the decision. I’m quite a confident person in myself anyway. Mark was laidback about it all, it wasn’t an issue for him. I’m not going to get a reconstruction, though I’m looking into prostheses for the summer. I don’t really want another operation – I thought I’d feel imbalanced but actually I feel fine. If I was younger I might be more bothered. If anyone looks at me strangely or feels uncomfortable, that’s their problem, not mine.

I feel guilty, in a way, that I didn’t have to have chemo, like I’ve almost gotten away with it. But I’m so grateful I didn’t need it. I feel like I got off quite lucky – losing my breast in return for my life is a small price to pay.

My mum died of ovarian cancer when she was 56, and because of her history, I’ve been paying for mammograms since I was 40. When I turned 45 and became eligible for free mammograms, I started having them every two years. I was due in August for my next mammogram, and my previous mammogram had come back clear.

The DCIS they found was only 16mm. It was really small, and you’d normally find that only on a mammogram, so it was a fluke that I found it myself. For such a negative thing, the whole experience couldn’t have gone any better, given the circumstances.

When I was diagnosed, I thought why not me? I know a lot of women who had breast cancer, so I was very accepting of it – why shouldn’t I get it when lots of people do? I’ve got a busy, happy life and breast cancer hasn’t made me reevaluate too much because I’m an appreciative person anyway. The biggest thing was that it made me realise who my true friends are and who I can count on.

It’s funny, I’m in the next phase of my life as the kids have all left home. I had a three-and-a-half-month trip booked around South America, which can’t happen now anyway!

With COVID-19 it’s been a stressful time for everybody, so many people worried about their jobs, so it made it harder for me because I felt sorry for everyone else. We’ve got a dental practice, where my husband is the dentist and I’m the practice manager. We couldn’t have patients during lockdown, so we had no income. I really felt for my husband; it was a lot to contend with and he had to be strong for all of us.

I’ve told everyone they better make sure they check their breasts every month. I didn’t think it was going to happen to me, but then I wasn’t surprised. You just get so busy in your life and you don’t think of doing it. But I’ve told my two sisters ‘Make sure you check your breasts’. We all think we’re invincible, but having gone through it, it’s opened my eyes to how important this is. It’s always in the back of my mind that it might come back, and I’m more aware now – I check my other breast regularly now.

The lovely thing about the Breast Cancer Foundation NZ nurses was they got in touch a week before my operation, when I was at home waiting with no clue what was going on. They took the time to explain the procedure to me, which was really nice because I hadn’t seen my surgeon and I didn’t know what to expect. I didn’t want to bother the breast nurse, so it was really nice having BCFNZ be so sympathetic. They gave me the heart-shaped pillows and seatbelt covers and the nurse called me to see how I was doing. I haven’t used the counselling, but I got it for my husband and daughter. I think it would be good for Mark; he couldn’t talk to his friends because of COVID-19 so he didn’t have a release.

I did do the physio sessions, and I’ve nearly got perfect movement back now as I’ve been zealous doing my exercises. It was so good having the physio – I haven’t rushed it but I just wanted to get back to normal as soon as possible. I’m back at tennis now, which I love, and back at the gym.

For others going through this, I would say to remain positive, which I know can be easier said than done! Just go with the flow and know there are loads of people out there who can support you. Absolute strangers have done nice things for me and I’m blown away by how lovely everyone has been.