On Monday 8th July, 2014, Angela noticed that her left breast had become hard, swollen and felt like it was burning. Three days later, on the advice of her doctor, she had a breast scan and core biopsy. That Sunday a lump appeared under her arm, and on Monday, after a blood test, and appointments for several more tests, Angela began freaking out.

“They’re not saying much, but there’s a chance that it’s cancer.”

On Wednesday 30th July, Angela was told that she had triple negative inflammatory breast cancer and would be beginning chemotherapy at the end of the week.

Below are a few excerpts from her diary.

Saturday 2nd August
Having a lot of anti-nausea drugs today but feeling ok. Hungry often but not for much. Greg makes me a cupper as soon as I wake up. He is really amazing checking up on me; getting me whatever I want when I want it. My family are just wonderful, and I love them all.

Saturday 9th August
Feeling ok but a bit emotional. I seem to get upset over nothing.

Tuesday 19th August
I have a little niggle under my armpit and my breast felt funny, but maybe it’s just me. Lost a bit of hair when I brushed it this morning. Looks like it’s starting to come out. Oh bugger, not sure how I feel about this…

Friday 22nd August
I had my hair cut short today as I was losing too much - it looks good. Wasn’t ready to have it shaved. Woke at 3am and was wide awake and couldn’t go back to sleep until about 4am. Woke again at 7am.

Sunday 21st September
Bit tearful this morning. I’m really scared about my CT scan, I’m not sure that I want to know the results but i’m trying to stay positive and will continue with my brave face for everyone. Had a sleep about 4pm and then Greg made me tea but I couldn’t eat it. I had a slight headache and feeling really hot all of a sudden so took my temperature. It was 38.6. I called Ward 23 and they told me to come to hospital. They gave me a chest x-ray and started me on antibiotics. I had to stay the night; pleased Greg was allowed to stay.

Wednesday 1st October
My results were really pleasing. The lump under my arm has gone from 11mm down to 4mm so everything must be working well.

Thursday 23rd October
Another blood test, done. Rang the nurse, Jenny, and she told me that I only just scrape in as the white blood cells need to be above 1.5 and mine are 1.6. At least I get to have chemo. Temperature tonight is 35.6.

Wednesday 5th November
Feeling good, a little tired but had great news – Amanda is pregnant! 16 weeks. I am so happy. Also, I won a $500 Briscoe’s voucher. Temperature is 35.8.

Saturday 15th November
I had bad stomach cramps today, enough to bring tears to my eyes. Even more when little Zoey came up and gave me a tissue, then got one for herself and wiped her own eyes. What a darling. Losing my taste buds already.

Monday 1st December
I went to see my oncologist, Mr Rhind, and what a shock - I am having surgery this Friday. I am really scared, but everything is going to be fine. I need to be strong and keep positive like I have done for the last 4 months.

Friday 5th December
Up at 5.30am to shower before the hospital. Told surgery won’t be until 9.30am – not pleased to have time to think about what’s about to happen. Cheryl from the breast clinic came and spoke to us for a while and then it was time to get into the gown and go through surgery. They put a line in my hand, popped the anaesthetic through and wheeled me into the theatre.

Next thing I knew I was waking up with the nurse calling my name in recovery. The surgery went well but I felt sick every time they put morphine in me, so they changed it. Greg and Mum were there when I woke – that was great but I was really dozy and just wanted to sleep. Got a nice pillow for my arm by the no-breast. I wasn’t worried about losing it.

Wednesday 10th December
Cheryl, the breast nurse, told me that there were no cancer cells in the nodes and tissue that was removed. Very pleased with that news. Got a call from The Pink Ladies and they’re going to send someone to see me. They run a support group for breast cancer.

Friday 19th December
I visited Mum today. She was really upset as its Dad’s 1 year anniversary. A bit worried about her as she repeated herself so many times. Miss you Dad, you have been my inspiration through all my breast cancer, knowing how strong you were. I love you Dad.

Tuesday 23rd December
Today I met Claire Hardy, the radiation oncologist. She was lovely. I need to get my exercises done so that I’m ready for my scan in 2 weeks, and can then start radiation 2 weeks after that.

Thursday 25th December
Merry Christmas. It was a great day seeing everyone. Mum got upset which is understandable – sad not having Dad there. Got Mum to change my dressing, as thought it had leaked too much.

Sunday 28th December
Still doing exercises for my arm, but doing them in the shower with the heat.

Wednesday 31st December
Still doing the exercises and getting my arm up a bit higher. Trying to push myself. 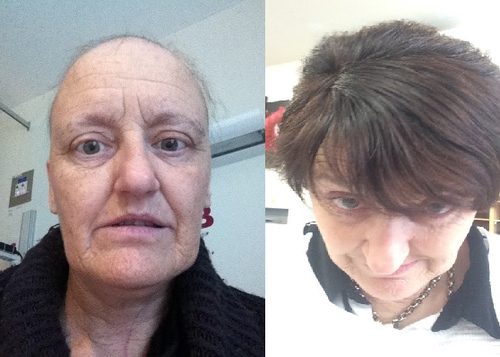 Angela during chemo, and after, with a full head of hair and a new hairstyle.

After completing her radiation treatment, Angela’s medical team found that she had a tumour in her stomach (known as GIST). Angela had to have a second surgery, during which the tumour was successfully removed.

Today, just over 3 years since she first noticed that her breast had become swollen, Angela feels ready to give back. She credits her positive mindset, her wonderful family and continuing to work throughout her journey, as the things which helped her make it through. Angela has continued to go on outings arranged by the Horowhenua Pink Ladies and is extremely grateful for their support.