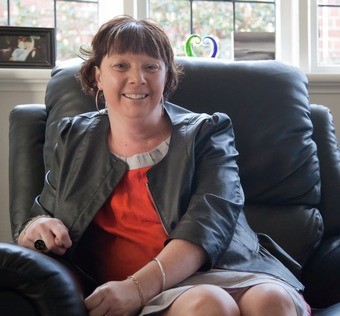 Leanne Smith died of breast cancer on November 9th 2013. Leanne wrote to us in October, as one of her last wishes was to publicise her story around the lesser known signs of breast cancer. Here's her story:

“I used to think I had all the time in the world. Now, I’m dying of breast cancer.

As I write this letter, I have only a couple of months left. At least, that’s what the doctors say. But my bucket list includes having Christmas with my family. Then making it to my 42nd birthday in January. I’m determined to get there.

The other thing that’s on my bucket list is telling you my story so the Breast Cancer Foundation NZ can get this important message out to every woman in New Zealand.

My story starts early in 2011. My left breast was sort of inflamed, and swollen. Probably a size and a half bigger than my right breast. Every night, when I got home from work, my bra would feel too tight. And every night I’d think, I’ll wake up tomorrow and it’ll be back to normal.

I managed to ignore it for six weeks. My father-in-law googled it and suggested mastitis. It never occurred to me it would be breast cancer. Because there has to be a lump with breast cancer, right? Wrong.

Turns out there are other symptoms of breast cancer, besides a lump, that most people don’t know about. In the end, my dad gave me a ride to the doctor. My GP took one look and phoned Dunedin Breast Care Services for an urgent appointment. When I came out, Dad could see I was upset. He said, “Why did we come to the doctor?”

I said, “They think I’ve got breast cancer.”But even then I didn’t really believe it. I had a mammogram and an ultrasound. The surgeon took my hand as he explained that I needed a biopsy. That’s when I thought maybe we were in the poo.

On Good Friday, the surgeon invited me and my husband Michael in to hear the results of the biopsy. Michael was saying, “It’s not going to be breast cancer.” I was too young. We’d only been together seven years, married four and a half.

We didn’t think it would happen to us. But it did. I had inflammatory breast cancer, which is very aggressive and hard to treat, so I needed chemotherapy to shrink the tumour before surgery.

The surgeon recommended a mastectomy of just the left breast. I remember sitting around the kitchen table with my family, discussing it, and my younger sister Deborah said, why not have a double mastectomy? She said, “I don’t ever want to sit around this table having this conversation again.” I’m very close to Deborah and her family – her oldest daughter is my double. Deborah’s view was, get rid of both breasts, fix it once and for all.

I’d been a 14DD, so I thought I’d be depressed, but I wasn’t. Michael says that when he came to see me after the operation, I was sitting up like the queen.

Then came radiation, and after that I started five years of tamoxifen. I thought I was home and hosed. I was back with my family, back with our boys – Michael’s sons, my stepsons: Jayden, who’s now 20, Thomas, 18, and William, who’s just turned nine. We went on holiday. I started back at work. I started a rehabilitation fitness programme. Then, in February 2013, I got a cough.

My GP thought it was chronic asthma; even my oncologist thought it was asthma. It never entered my head the cancer would come back. But during a routine checkup, my breast surgeon found a lump. The cancer was back and it had spread to my lungs.

Michael said, “Okay, we’ve been here before. We’ve beaten this before. What can you do for Leanne?”

Turned out there was nothing they could do. My timeframe was eight weeks. The oncologist told me two to four months. “Definitely not six.”

The strange thing is, having that timeframe, it felt like a weight had been lifted off me. I feel so much better not having hospital appointments, not having chemo. Yes, everything has changed. But inside, I’m still me.

As I write this, Michael is still going to work. It seems a good thing, until we decide it’s time to stop.

I’m on oxygen 24/7, and Deborah comes over every day to give me my anti-clotting injection in my stomach – I couldn’t bear to do that myself. I have to be in a wheelchair to go out, but I still go to my nephew’s kapa haka, and of course I go to William’s rugby. I have to go, no matter what the weather, because I can’t go next year.

I had some things I wanted to do with Michael. I rebooked our wedding anniversary dinner, which we missed out on during my treatment. I’d been wanting to try this really nice restaurant here in Dunedin, Pier 24. So I’ve ticked that off, and I’ve also ticked off getting a family photograph.

We’ve been having monthly dinners with our friends, having a laugh – I love that. We’re very open when we talk to our friends and family. There will be no surprises. Well, maybe one surprise…I had a funeral director around to organise my funeral. I’ve picked the colour of my casket, and no one else knows what it is.

I wanted to go to Queenstown, but I don’t have enough oxygen to get that far. Everything else on my list, though, I’ve done. Except…I need to tell others my story. Which I’m doing now.

I’ve told you the importance of knowing all of the symptoms of breast cancer. Please, help me share this story with other women by donating to the Breast Cancer Foundation NZ so they can continue their valuable education work. With your help we can save lives.

Thank you for your consideration.

If you’d like to donate towards Leanne’s legacy , we’ll be able to educate more New Zealand women – mums, sisters, daughters – about the lesser-known signs of breast cancer. To donate to the Foundation’s education programmes: Phone 0508 105 105 OR please donate online.

And please keep an eye on your breasts. If anything changes, show your doctor right away.